THE SWANSONG CONSPIRACY (The Eldritch Twins #1) By Nick Vossen! 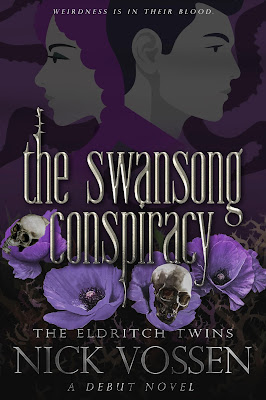 The Swansong Conspiracy is set to release October 6th, 2021!

THE SWANSONG CONSPIRACY, BY NICK VOSSEN

"After a near cataclysmic worldwide event shook the foundations of society and unleashed
numerous supernatural hazards onto the Earth, twins Quincy and Lilly just want to lead their
lives as normally as possible. However, this proves to be quite difficult. The twins are the heirs
of legendary horror writer and occultist W.A. Swansong, who has been declared a prophet now that many of his gruesome creations appear to really exist.


When a mysterious inheritance falls into the twins’ hands, a strange and violent secret


organization becomes hell-bent on finding them. Quincy and Lilly are forced to flee their
hometown of New Orleans, leading them on a wild, supernatural chase throughout the southern United States. With only a handful of allies and a trapped Fire Vampire named Tim, the twins uncover a great mystery tied to their inheritance, the source of all pandemonium, and even the true origins of mankind."