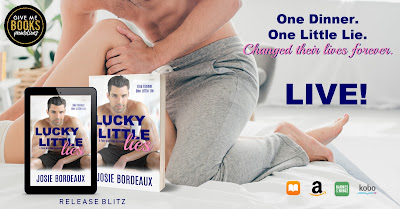 One dinner.
One little lie.
Changed their lives forever.

One sinful night of passion with a nameless man cost me six months of rotten luck.
Now he’s back and asking for a favor.
Pretending to be his wife for one night should be simple enough.
After all, it’s just one little lie, right?
I know better than to help him out, but I can’t help myself.
He makes me want to risk it all.

Josie Bordeaux spends her days writing romance novels that revolve around friendships, sizzling attraction, and steamy sex scenes. Josie's addiction to iced coffee and strawberry Twizzlers keep the stories flowing and gives her the energy she needs to run her kids to all their after-school activities and burn the occasional dinner she attempts to cook. She enjoys spending time down at the beach with her family.


Sign up for Josie's newsletter for all new release info: https://bit.ly/2POFktK or text “JosieBooks” to 24587 for alerts (US only)