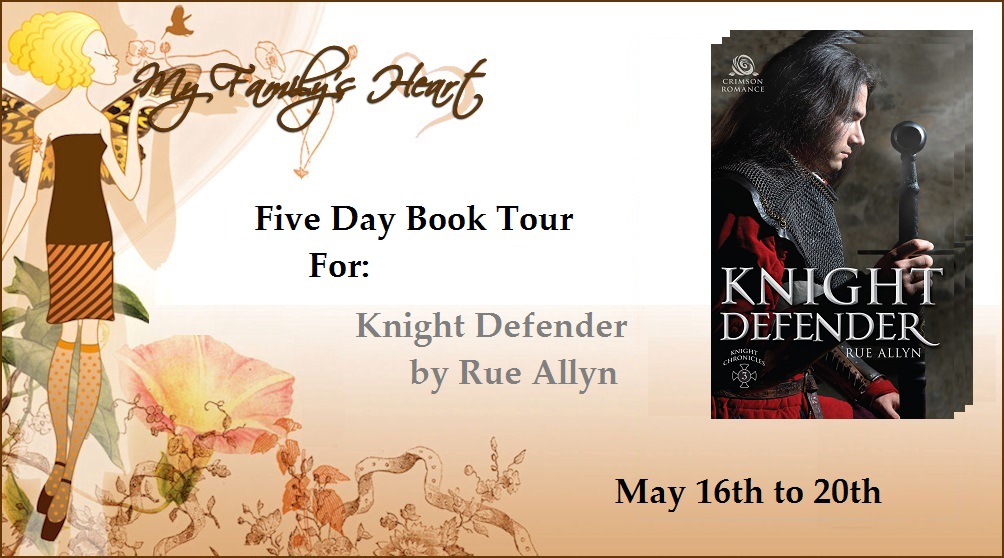 Sent alone to Scotland to wed a wild scot and serve the needs of her father and her king, Lady Jessamyn plots to escape the marriage and make the life she wants. In Scotland she finds not the wild boorish monster she imagined but a Knight Defender who would claim her heart, if she will only give up her dreams.
Baron Raeb MacKai is done allowing himself and everyone he loves to live in poverty and despair. His betrothal to a wealthy English heiress will solve a decade of problems. He will do everything necessary to defend his home and his country, but can he defend his heart?

“Unhand me.” She pushed against the massive chest and writhed in the arms cradling her body. He gathered her closer, mashing her cheek against him. For an instant, his blazing gray eyes held her spellbound as tightly as his strength gripped her body. Unable to look away, she shivered, but not with cold. The odor of damp wool and man nearly drowned her. All sound faded away save her own harsh breathing. “Ho, ho!” His chuckle was impossible to miss. “So you are no dying, are you then? Well liars and deceivers must suffer the consequences of their actions.” She refused to be intimidated. She forced her head away from him. “Is rudeness the customary greeting for your guests, Baron MacKai? I’ve a mind to refuse to wed you. Then King Edward will decline to pay you rent for docking his ships in your excuse for a harbor. “You think you could resist me?” More chuckles shook his chest. “It would be a small matter to deny an oaf such as you.” Flames of some inner fire shone in his unyielding stare. She was unfamiliar with fear, but what else twisted in her belly and skittered just beneath her skin? She wanted to deny his effect on her but in all honesty could not. “I could make you beg.” He growled low, like some big cat poised to pounce. “Never.” She could be honest with herself about her body’s betrayal, but she’d plenty of reason not to give the churl any hint of her weakness. His forward motion halted, his head dipped then stopped a finger’s width from her face. His gaze bored into hers. Her breath froze at the frenzy of emotions she saw there. ‘Anger, threat, resentment, and something she could not identify. She refused to care. Her fingers itched to slap him, and she raised her hand. “I wouldna, if I were you.” He anchored her hand beneath a brawny arm and started walking again. “You’ll regret insulting me.” His brows rose. “We’ll see about that. For now, I need you safely stowed away.” “Stowed away!” He made her sound like bothersome chattel, useful for only one purpose. She squirmed and finally released her outer hand from his hold to beat her fist against his chest. “Beast! You will treat me with the courtesy and respect due a lord’s daughter.” He made no response other than to quicken his pace. She hit him harder. “You and your entire cowardly clan will rue this day.” He stopped abruptly and shifted his grip. Her feet fell downward but found no purchase on solid ground. She hung suspended from the large hands thrust under her armpits. The heels of those palms pressed against her breasts, and heat flooded her body at the intimate touch. “You, you …” He and every MacKai disgusted her beyond words. Raising her head to berate him further, she stilled. Once more, the gleam in those stony eyes compelled her attention. The downward tip at the outer corner of his lids gave him a slumberous appearance belied by glints of indecipherable emotion. Those deceptive lids narrowed. She longed to hide but could not look away. “Listen to me.” His quiet words slid over her skin, causing a rise of goosebumps. “You are naught but a troublesome woman. You have no power or authority here, so if you value your overly pampered English hide, you’ll nae insult clan MacKai. Do you understand?” She swallowed and nodded. “Excellent.” He tossed her over his shoulder, secured her legs against him with an arm, and continued walking. “How dare…” One of those huge palms smacked her rump. “Oooo! I’ll make you regret you ever touched me.” A second smack was followed by an order for silence. Since her backside began to throb, Jessamyn subsided in favor of plotting retribution. She’d start with boiling in oil followed by a sound beating and end with banishment. She was deciding whether or not to add tar and feathers when she heard the creak of leather hinges. They crossed a doorway, and she went flying through the air to land in a heap, face down on a feather bed. “Dry clothing will be brought. Dinna imagine I care for your comfort. I simply canna be bothered to find another woman if you catch an ague and die.” She struggled to right herself, sputtering and pulling her hair from her face. The brute deserved the sharp side of her tongue. She gathered breath as she turned to speak, just to see the coward disappear and the door bang shut behind him. He was not getting away that easily. She leapt from the bed, ran for the door, and nearly jerked her arms from her shoulders when the wooden barrier refused to budge at her angry pull. Dumbfounded, she could only stare. He’d barred the door? Boiling oil and banishment are too good for him. I must see him drawn and quartered.

When not writing, loving her spouse, or attending Toastmasters meetings, Rue travels the world and surfs the internet in search of background material and inspiration for her next heart melting romance. She loves to hear from readers, and you may contact her at contact@RueAllyn.com. She can't wait to hear from you.

A lovely bracelet in a ‘tree of life’ motif. A pair of square cut blood red crystal studs.