PROVOKED
by Angela Ford Official genre of book: Romantic Thriller
Her husband's actions provoked her but his death haunts her. Did Basia get away with murder?
Basia offers help to three abused women. Adam Crawford owns the Brownstone where these women live. Adam is fed up with the domestic disputes and drug deals in his building. One death at a time puts an end to both.
Six weeks after being shot, Detective Riley has one night of incredible passion and an agreement to first-names-only. He has no idea who Basia really is until he returns to work.
The case of a missing woman takes Riley to Adam's Brownstone and a manuscript titled The Perfect Poison. Could the man be doing more than collecting rent?
Secrets, lies, and hidden agendas bring Riley closer to the truth. The case opens doors Riley wished he'd left closed. Riley has fallen in love. But that scares him more than the horrifying truth he uncovers with the case.

His day usually entailed murder and drugs, not some missing person. This is the last place I want to be. As soon as he finished that thought, he saw them; those long legs coming toward him. How could he forget? They’d been wrapped around his neck the night before. He swallowed hard. His eyes traveled to meet those Mediterranean blues. Riley could tell by the astonished look in her eyes, she was just as shocked as he. An introduction wasn’t necessary but she remained professional and awaited one. “Detective Riley Briggs, welcome to the thirty-seventh precinct.” Lieutenant Mark Fields introduced himself with a hand-shake then turned to the beautiful woman beside him. “This is Lieutenant Basia Lis from Forensics. She’s consulting on a case.” If he’d still been in homicide, their paths would have crossed. But being undercover with the drug task force he no longer stayed on a scene long enough for the CSI to arrive. Then again, if their paths had crossed; he wouldn’t have had the pleasure of her in his bed. Riley didn’t mix business with pleasure. For the reason he didn’t like to see any woman twice. Basia stepped forward and extended her hand. “Detective” She smiled differently than she had earlier that morning. Then again she wasn’t wearing any clothes. Riley shook her hand. “Lieutenant” 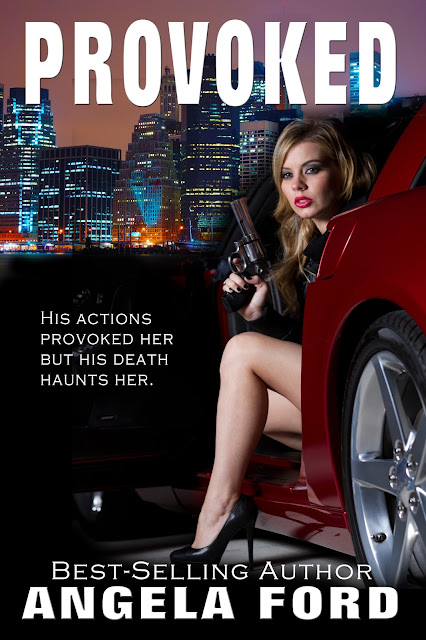 Her love of the ocean and sunsets are always in her heart and give her inspiration. Her love for words keeps her turning the page. She is never without a book, whether she’s reading or writing. Now residing in Ontario, Angela works in Finance – numbers by day – words by night. Her dedication to volunteer and involvement with cyber safety seminars gave her an Award of Distinction and sparked the idea for her first book Closure – suspense with a dash of romance that hit the best- selling Action/Adventure and Women’s Fiction. Angela continued this FBI suspense with Forbidden and will deliver the final of the series in 2015. She also writes contemporary romance, sometimes sweet…sometimes spicy and sometimes with a dash of suspense. Unforgettable Kiss delivers a spicy romance with a dash of suspense. Blind Tasting of The Love List series and The Christmas Wreath of the Forever Christmas series are sweet reads. 2015 kicked off with a new Romantic Suspense Surrender. Between two jobs, being a mom with a home always filled with young adults and rather interesting stories; she is lucky to have one very patient and understanding man. But it is the furry family members who rule the house – a Puggle (Pug/Beagle), a new Chug puppy (Pug/Chihuahua) and two loveable cats. Every possible quiet moment she finds, she treasures and just writes about the moments to come. Angela is an avid reader of romance, a member of the RWA, KOD (Kiss of Death – Suspense Chapter) and Mississauga Writers Group. You can follow her at BTGN www.bookstogonow.com or visit her website/blog Romantic Escapes at http://www.angelafordauthor.com to connect with her on her social network sites. She loves to hear from her readers – they keep her smiling!
AMAZON ✯ WEBSITE ✯ FACEBOOK ✯ GOODREADS ✯ TWITTER ✯ PINTEREST
✯ LINKEDIN ✯ BOOKS TO GO NOW ✯ TANYA WATT'S LUV ME A BOOK