Edinburgh is a city that's slow to change. Which is why in 2061, Professor Lachlan Mackenzie still lives there. He hasn't changed in the 1000 years since he and his shipmates abandoned ship, forsaken by the Vampyras millions of light years away and left to fend for themselves, feeding off the blood of humans.
Lachlan is drawn to sexy psychologist Kate the moment he steps into her office. He wants to protect her and help her overcome her PTSD. Ignoring the warning signs of his growing attraction he agrees to be her cabin mate on the journey to the new colony on Mars. But when Kate discovers him feeding on bagged blood, all hell breaks loose. Has he been set up by the Vampyr council leader? Will Kate ever forgive his lies? And how does he explain what he is to his long lost daughter who he meets on their journey?
As Kate starts to trust, outside forces threaten to rip them apart. Will Lachlan lose the only woman he's ever truly bonded with?

He forced himself to move his lips across her cheek, peppering light pecks down her jawline as she tangled her fingers in his hair and whispered his name.
Suddenly she started to struggle. “Lachlan, your teeth.”
“What about them?” he asked, pinning her back to the bed and tugging at the shoulder of her white tennis dress. It moved down to her elbow easily, and he revealed the cup of a white lacy bra. His cock jerked and his heart beat speeded up. Soon, very soon his lips would be around the dusky areola he could see just beneath the material.
“Are they in or out?”
He lifted himself slightly off Kate pulling the other side of the dress down, unconcerned with whatever was bothering her.
“My canines are in for now. Why?” Another perfectly-shaped and perfectly-sized breast. “Lift your hips.” She did as she was bid, and he slipped the sexy little tennis dress off, reminding himself he needed to ask Meg to send some hydrogen peroxide.
“I still have blood on me.”
Lachlan leaned on his elbow and surveyed her, cocking an eyebrow. “You do indeed.” There was a line of dried blood running from just below her collarbone, under the cup of her bra, and probably pooling just under her breast. He touched it lightly with an index finger, tracing it as far as the edge if her bra. “That…my darling Kate, is every male Vampyr’s wet dream."
He pressed his tongue to the edge of the lace, and Kate sighed, her eyelids fluttering closed.
“What if your teeth pop out again and you bite me by accident?” she asked as she arched her back, reaching for the touch of his tongue. He chuckled against her breast.
“Did your mother never teach you it’s rude to disturb a man when he’s eating, Katie? 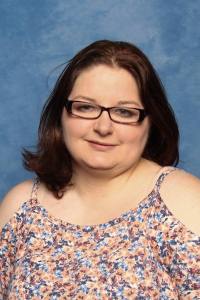 Em was born and brought up in the Central Belt of Scotland and still lives there. She was told as a child she had an over active imagination--as if that is a bad thing. She's traded her dreams of owning her own island, just like George in the Famous Five to hoping to meet her own Mr Darcy one day. But her imagination remains the same.
AUTHOR FOLLOW LINKS
AMAZON AUTHOR PAGE | WEBSITE / BLOG FACEBOOK | FORSAKEN BLOOD FB PAGE TWITTER | PINTEREST | TUMBLR | GOODREADS