One With the Night by Susan Squires 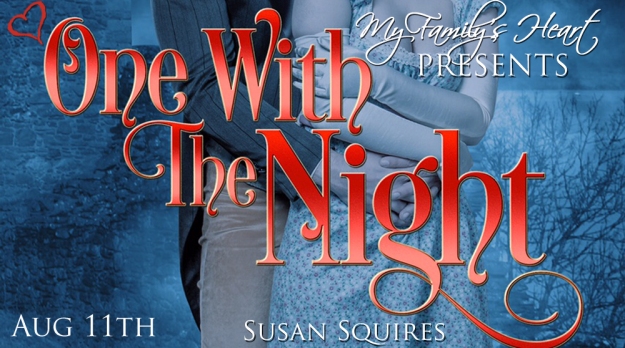 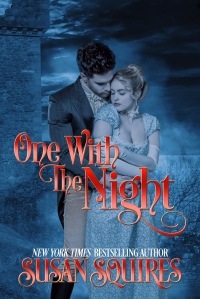 Far from the glittering lights and shallow bustle of 1822 London lies another world—a realm of shadows and secrets, where desire holds dominion and passion know no limits…
ONE DESIRE

Jane Blundell’s keen intellect and wit have always set her apart from her marriage-minded peers. But such differences are nothing compared to the change that comes upon her when she is infected by a blood sample in her father’s laboratory. Suddenly her veins resonate with a terrifying, exhilarating power. Dr. Blundell takes Jane to the Scottish highlands to research a cure, where she collides with the only man who can understand her hunger—and slake her unending desire…
ONE DESTINY

Callan Kilkenny has returned to England from Marrakech, still filled with self-loathing at the deeds he committed in the name of a beautiful, depraved vampire. Now that he has tracked down Dr. Blundell in hopes of a cure, he has also found a kindred spirit in Jane. Her passion and her blood call to Callan, fueling a carnal need that shocks them both with its intensity. But others have come in search of the cure too…for reasons that are deadly. And to save Jane and the rest of their kind, Callan must risk everything—even his last chance at redemption…
ONE WITH THE NIGHT

“When it comes to combining extreme sensuality with dangerous drama, no one does it better than Squires.” --Romantic Times BOOKreviews

He came to stand behind her and cleared his throat. “I ha’ been meaning ta thank ye for what ye did for me that first night, and fer sharing th’ blood ye collect. Ye’re verra kind.”
“It was nothing. You would have done the same.” He was too close.
“Ye dinnae know that.” He shifted awkwardly. His eyes were light in the darkness of the tower room. Did he feel his mistake in standing too close? Would he move away?
“Yes I do.” Her body was reacting as if it had been struck by the lightning that illuminated the loch. The thunder was rolling farther away now. Or maybe that was just the thumping of her heart in her chest. Her thighs were slick. She had been running from the feelings he raised in her ever since he got here. But in truth, she wanted very much to know what it would be like to make love to Callan Kilkenny.
“Ye must ha’ thought me churlish no’ ta thank ye and yer father.” He, too, looked out over the loch so he wouldn’t have to look at her.
“No. I didn’t think you churlish...” She took a step toward him in the darkness. She could feel his ragged breathing. And what of her own? She took a breath. It is an experiment. She only wanted to see how the physical act of making love with a vampire, in her new vampire state, compared with her experience, human to human, with Tom Blandings. That was all it was. She felt his reluctance, and yet she was sure he wanted it, too. Was it his honor that kept him from taking her in his arms?
She knew he was honorable, for all his pretense of callousness. “I thought you didn’t think yourself worth helping. That’s different.”
“I might ha’ been right.”
Jane had to get some distance here, or she was going to just throw herself at him.

Susan Squires is a New York Times bestselling author known for breaking the rules of romance writing. Whatever her time period, or subject, some element of the paranormal always creeps in. She has won multiple contests for published novels and reviewer's choice awards. Publisher's Weekly named Body Electric one of the year’s most influential mass market books and One with the Shadows, the fifth in her vampire Companion Series, a Best book of the Year. Time for Eternity, the first in the DaVinci time travel series, received a starred review from Publisher's Weekly.
Susan has a Masters in English literature from UCLA and once toiled as an executive for a Fortune 500 company. Now she lives at the beach in Southern California with her husband, Harry, a writer of supernatural thrillers, and three very active Belgian Sheepdogs, who like to help her write by putting their chins on the keyboarddddddddddddddddddddddd.