Blood and Brume By Maki Morris 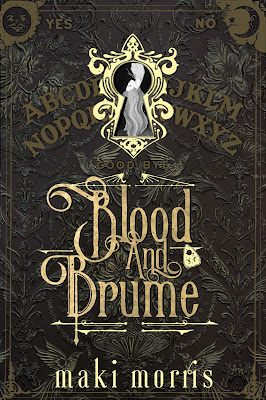 "Sixteen-year-old Ellie Porter is done with life.
When one of her mom’s boyfriends tries to rape her, Ellie runs away, determined never to return. But Sam, Ellie's only friend, is not about to let her end up another runaway living on the streets.He takes Ellie to an abandoned house, the perfect hideout, or so they think until a series of frightening experiences cause Ellie to regret ever stepping into the house in the first place.She is consumed with fear when two young men in 19th-century costume appear at the house claiming to be its owners. Ellie's initial assumption of them being Steampunk enthusiasts quickly proves wrong when she learns that they are ghosts.The encounter marks the beginning of unimaginable changes in Ellie's life. As the portal opens between the flesh and the spirit world, Ellie awakens to the profound realization that unresolved life can transcend time and space, and there will be no peace until it is rectified."