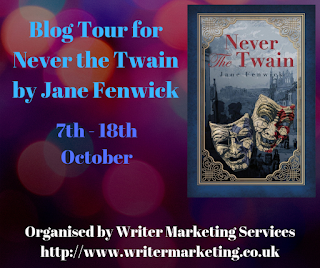 
Oh east is east and west is west and never the twain shall meet.

Twins run in my family. I am a twin and I have a twin nephew and niece. Now twins feature in my latest historical crime novel Never the Twain.
The twin gene is passed down the female line which means that dizygotic twins develop from a separate egg and each egg is fertilised by its own sperm cell. These are known as fraternal (non identical) twins. Identical twins happen when a single egg is fertilised. The egg then divides in two creating identical twins who share the same genes. The central characters in Never the Twain April and May, are identical - monozygotic twins. They might look alike but are very different in temperament.
Twins have always fascinated me probably because there are several sets in my family. It is often said that twins have a special bond because they grew together in the womb. I believe twins share a special connection beyond that of ordinary siblings and there are many stories to support this idea. Listening to my niece and nephew finish each other’s sentences is one example - they seem to know what the other is thinking. Another is that sometimes one twin will sense that something is wrong when their twin is in trouble. Sometimes twins will realise they have performed similar actions when they are apart like buying the same item. As a result of such anecdotal evidence, it has been suggested that twins can read each other’s minds; that they have special twin telepathy and that they have extrasensory perception. However, there is no scientific evidence to support this. While this phenomenon is assumed to be more prevalent in identical twins, it also happens in fraternal twins because they experience a deep emotional bond too.

April and May, the identical twins in my story are born within minutes of each other but born as the month changes from April to May so they effectively have different birth days. The twins are very close and share many traits and behaviours but in other respects they are diametrically opposite to each other, but either way they have a strong bond. It is this bond which I wanted to explore in Never the Twain. 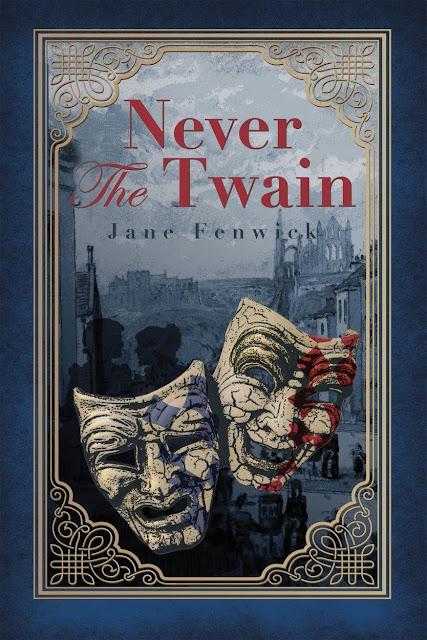 In Rudyard Kipling’s ballad. “East is east and west is west and never the twain shall meet” the phrase is used to suggest that two different things cannot exist alongside each other. This then may seem a strange title for a book about identical twins but I think Never the Twain is the perfect title as there are several instances where April and May although emotionally very connected find it difficult to co-exist. April and May ultimately find it hard to live alongside each other despite their attachment. Their relationship is gradually put under pressure until at last it is hanging by a thread. There are other examples where the characters are unable to co-exist but at the root of all these difficulties is the relationship between the twins and their birth mother Elizabeth. The actress’s decision to give up her twins to a brothel owner impacts on the lives of her innocent daughters. Ultimately the twin bond condemns them.

Never the Twain: A twin tale of jealousy and betrayal, love and murder.

The year is 1890. The port of Whitby is heaving with sailors and where there are sailors there are brothels doing a roaring trade. Beautiful identical twins April and May are in desperate straits. They have been abandoned by their actress mother and are about to have their virginity auctioned off to the highest bidder by a notorious brothel madam.
Their fate is hanging in the balance when Captain Edward Driscoll a handsome, wealthy shipping tycoon from Glasgow saves them before they can be deflowered.
But have they exchanged one form of slavery for another?
April, reluctantly swept up in her twin’s secrets and lies unwittingly becomes embroiled in a murderous conspiracy. Is May’s jealousy stronger than the twin bond which has always connected them?

Available from
Amazon UK
Amazon US

Never the Twain: A dark blend of Gothic romance and murder.
Jane Fenwick lives in the market town of Settle in Yorkshire, England. She studied education at Sheffield University gaining a B.Ed (Hons) in 1989 and going on to teach primary age range children. Jane decided to try her hand at penning a novel rather than writing school reports as she has always been an avid reader, especially enjoying historical and crime fiction. She decided to combine her love of both genres to write her first historical crime novel Never the Twain. Jane has always been a lover of antiques, particularly art nouveau and art deco ceramics and turned this hobby into a business opening an antiques and collectables shop in Settle. However her time as a dealer was short lived; she spent far too much time in the sale rooms buying items that ended up in her home rather than the shop! Animal welfare is a cause close to Jane’s heart and she has been vegetarian since the age of fourteen. For the last twenty years she has been trustee of an animal charity which rescues and rehomes cats, dogs and all manner of creatures looking for a forever home. Of course several of these have been “adopted” by Jane!
Jane has always loved the sea and although she lives in the Yorkshire Dales she is particularly drawn to the North East coast of Yorkshire and Northumberland. This coastline is where she gets her inspiration for the historical crime and romance novels she writes. She can imagine how the North East ports would have looked long ago with a forest of tall masted ships crammed together in the harbours, the bustling streets congested with sailors, whalers, chandlers and sail makers. These imaginings provide the backdrop and inspire her to create the central characters and themes of her novels. As she has always loved history she finds the research particularly satisfying.
When she isn’t walking on Sandsend beach with her dog Scout, a Patterdale “Terrorist” she is to be found in her favourite coffee shop gazing out to sea and dreaming up her next plot. Jane is currently writing a historical saga series again set on the North East coast beginning in 1765. The first two books are being edited at the moment; My Constant Lady and The Turning Tides. Look out for My Constant Lady in 2020.