Never Underestimate the Power of F*ck It

It’s the motto I live by, and it’s what made me the Navy SEAL I am today.  The less you care, the better.  Even when I woke up in a hospital in India with no memory of the last few months and everything pointing to me being a traitor involved with some pretty dangerous people, I knew I could handle it.

Then they kidnapped Charlotte—my little sister’s best friend and an organized control freak with a fear of commitment to anything but her ten-year plan.

I can't remember what I've supposedly done, or who's trying kill us.  All I know is I have to rescue Charlotte and get us both out of this mess alive.

But I hadn't counted on Charlotte having her own agenda.  She’s inexplicably haunted my dreams for months, and now she’s making my reality a living hell.  Because Miss Always-in-Control is hellbent and determined to lose that control she holds on to so tightly, and she wants to lose it with me…

“I know you like to know exactly what’s going to happen and how and when.  But that’s not how it’s going to happen tonight. Tonight, it’s all or nothing.  You give all the control, all the decisions, all the power to me.  No lists, no rules, no overthinking it, no trying to orchestrate it all.  You relinquish it all to me, or not at all.”
“All of it?” My voice squeaks, but Liam doesn’t waver.
“All of it,” he says in that stern, take-no-bullshit tone that makes me simultaneously thrilled and terrified.  Then he cups my cheek in his hand and adds softly, “All of you.”
Arousal shoots straight to my sex like a flaming arrow seeking its target, but it’s accompanied by a lifetime of fear of letting go, of being vulnerable and giving anyone the power to hurt me. Can I do this?  I’m powerless to say no.  Some little part of me had wanted to keep a little control over things tonight, but faced with the choice of giving myself wholly to Liam or going back to Charleston, back to my old life with regret, if we even survive…it’s a no-brainer.   If I’m really going to be different, if I’m really going to learn to ride the waves and experience the thrill that comes from actually living, I have to stop planting my feet in the sand.  And I want this experience with Liam more than I’ve ever wanted anything.
“Okay.”
The smile he gives me could power the entire resort.  “Give me your wrists.”
“What?”
“Give me your wrists.” His voice has lowered an octave and has a rasp to it that is doing strange things to my insides.
Oh God. “Um. I…we…maybe we should take this slow?” I stammer.
“Oh, we will.” The way he says it makes me think we’re not talking about the same thing. “Now give me your wrists.”
“I have a better idea.  Why don’t we sit on the patio for a few minutes, maybe talk a little…”
I trail off as he closes the distance between us in two steps, his fingers in my hair as he wraps my hair around his hand and tugs, forcing my head back.  Distant memories of my dad flash through my mind and I think he’s going to be angry—after all, I’ve just proven I can’t even do the first thing he’s asked me without arguing—but instead he presses his lips to my neck, kissing me softly. “You always think you have a better idea, don’t you?” he says softly.
This is Liam.  Not my father, but the man who makes me feel safe, who makes me laugh, who somehow makes me feel empowered with every ounce of control I give up.
“Well, um…mmmmm.” I sigh with pleasure as his lips slowly travel toward my ear. “I do have pretty good ideas.”
“How are we going to settle this battle for control we seem to have?”  His teeth are nibbling on my earlobe now.  “Especially since you keep telling me you want to lose it.”
“Ummm.” I can’t think straight with his tongue tracing the outline of my ear.
With my hair still tightly gripped in his hand, he tugs my head back. His eyes are glittering as he says, “Don’t get me wrong, sweetheart.  I get horny as hell when you make lists and get all organized and try to control shit, because that’s when you need me to distract you most. To put you to work and quiet your mind. But if you want to dance, then you’re going to have to trust me to lead.  You’re going to have to give me all of you.  Starting with your wrists.” 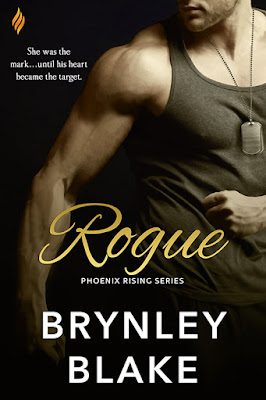 A lifelong reader with a taste for adventure, Brynley Blake writes the writes the kind of books she likes to read: steamy contemporary romances featuring smart, sassy heroines with a sense of humor and strong, dominant alpha males who love their women a little feisty.  She loves rainy days, books, worn-in jeans, hot coffee, cold beer, red wine, exploring new places, and happily ever afters. When she’s not writing, you can usually find her cheering on her kids at their activities, hanging out with friends, or crossing things off her bucket list. She writes contemporary and erotic romance as Brynley Blake and Brynley Bush.

a Rafflecopter giveaway (US only)

a Rafflecopter giveaway (Open internationally)
Posted by blogger_rach at 06:00