The Vendetti Queen by Sapphire Knight 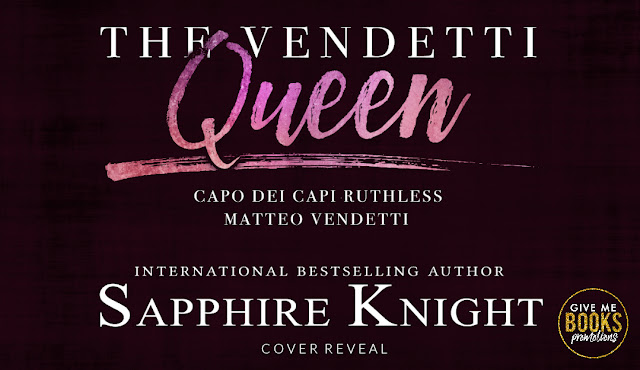 Violet Vendetti was the Bottaro princess-- was.
She’d been betrothed to the Capo dei capi of New York, without ever knowing it.

A deal made, is a deal kept, as far as the Vendetti Crime family is concerned. No
matter that it was her father to plead for her safety offering up her hand in marriage
amongst other promises. The Capo always comes to collect what is owed.

Violet is swept away into a world she thought she knew, only to discover everything
isn’t what it may seem. From family traditions to deals struck, she learns exactly what
it takes to be the Vendetti queen.


“Oh really...I’m young and dumb now, huh? Well, you’re old and a dick.” She shrugs, pulling the sheet a bit more to wrap around her to stand. She’s so damn mouthy, and towards me of all people. If I were a lesser man I’d have her gagged for such disrespect.

“Where are you going?” I push, egging on an unnecessary argument. Watching her attempt to get away from me even quicker has my Vendetti temper flaring. The Capo rears his ugly head at not having his whim met immediately.

“I’m not laying here while you decide to talk down to me after I gave my body to you freely.”

“Who will you run off to next, then?”

“You’re unbelievable!” She scoffs and I rip the sheet out of her hands, wanting to hold her body to mine. Rather, she lets it go and practically hops away.

The growl rumbles free, as I toss the vacated sheet off to the side. “You’re not going anywhere,” I command, on the cusp of raising my voice. It’s so unlike myself, I feel as if I’m spiraling...I don’t raise my voice, I don’t ruffle, or even give a fuck. I demand, I take, I conquer- I claim what’s mine.