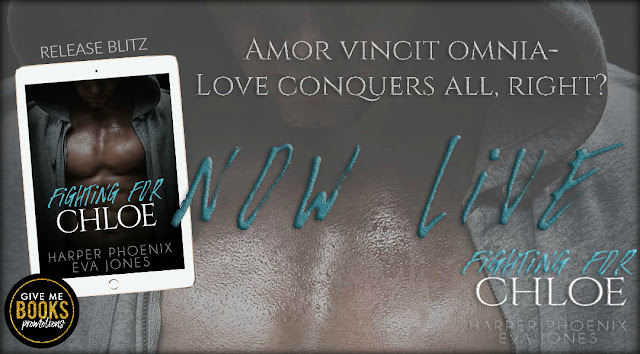 My life was simple…
Never lose a fight.
Life has dealt me a shitty hand, but I make the best of it.
All that matters is the payday so I can keep a roof over our head and the bailiffs from our door.
Life is complicated enough, or so I thought.
Chloe is the most attractive woman I have ever laid eyes on. But her name is spelled ‘trouble’ with a capital T.

I ran away to get as far from him as I could. I made a new life. A good life.
But his problems found me, and so did an unexpected stranger.
Should I accept his help or just keep running? Should I just ignore this pull I feel towards him?
Keeping his family out of danger should be my priority, so why can't I just pull away?

"Fighting For Chloe is a powerful story about the intensity of love and the things we're willing to risk, and sacrifice, to hold on to it." - Amali Rose, contemporary romance author

“This has everything in it. Drama, action, suspense and, of course, hot chemistry. You won’t want to miss it!” - GR Reviewer

I was born and bred in East Yorkshire England, and I still live in my hometown, with my husband and children.

My journey with stories began when I was just a child, I would often scribble down wherever my dreams or imagination took me.

My journey with writing stories, began much later when I became ill and housebound for a period of eighteen months. I decided I would escape real life and become immersed in a story of my creation. With the support of my husband and family my first real story was born. I would stay up night after night tapping the keys of my trusty laptop, while my husband lay sleeping beside me. I was hooked. But it wasn't as easy as that. My story needed work. A lot of it. And it sat on my computer for some years after that. Later on I decided to embark on another journey. I went to university, where I studied Creative writing and English literature.

I then decided with a new wealth of knowledge that I would once again delve into the world that I had created. I had never forgotten the characters and would often think about what I would have liked to have done with them over the years. I had grown to love them for getting me through a very difficult period in my life, and I wanted other people to read all about them. And so I began to rewrite my book.

It wasn't until I delved into the 'Book world' on Facebook that I discovered the 'Indie book world.' It's amazing! So many authors are now being heard publishing this way, and I can only hope that my books will leave a lasting memory for some or all of you readers too!

Eva Jones' love for the written word started in her early teens, when she'd sneak off with her mother's historical romance novels and blossomed from there.

Although she's always dreamed of moving south and starting a horse farm, Eva is an Ohio native who isn't ashamed of her undying love of 90s R&B, and the fact that going under the tattoo needle excites her.

Her passion for reading led her into this wonderful indie community, and landed her the role of personal assistant to one of her favorite indie authors.

When she's not running around after her three little gizmos and one big gremlin, you can find her crafting stories about flawed characters finding love amongst the chaos of life.