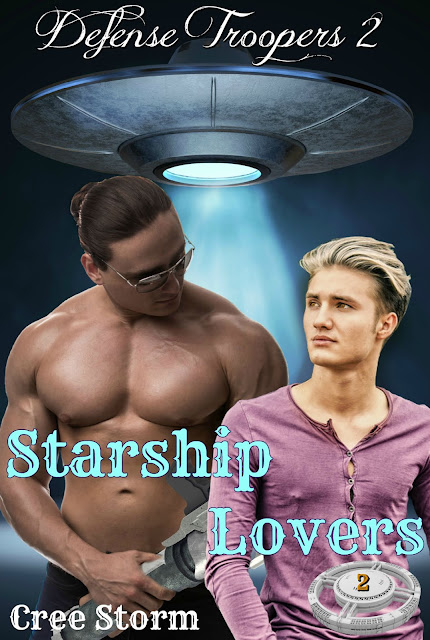 
Faruke is a Defense Trooper and second in command, it was his job to make people fear him…well that is until he met Marty. The other half to his soul. Now for the first time he was afraid. One of the most evil of his planet was after his mate and Faruke would do anything to keep his mate alive and safe from harm…even if it meant his own death.

The door opened, and Bryton walked into the room carrying a tray. “Hey, Pops thought you might be hungry.”

Marty started to shake his head, but Bryton wasn’t about to hear it, “You will eat it, or I will get my man to hold you down as I puree it and pour it down your throat.”

“You know you really have an attitude. I would think with all that sex you’re having, you would be… I don’t know… skipping around singing Zipadeedoodah or something.” Marty said as he sat down and placed the tray on the side table.

Marty picked up his roast beef sandwich and took a bite. Bryton walked over to Faruke, “You know, he looks so innocent and sweet when he sleeps. Yet, when he opens his mouth he’s like that Alien creature which spits acid.”

“God, Bryton, why do you have to be such an ass. The man almost died.” Marty hissed.

“And if I recall, it was me who kept it from happening. Somehow I think I’m going to regret it.” Bryton muttered.

Marty snorted as he finished half of the sandwich, took a drink, then said, “This coming from the man who said he needed Faruke to live so he could have someone who could almost match him in sarcasm wars.”

Bryton shrugged, “I’m not the one who promised him dates if he lived.”

Marty felt his stomach knot and feared that half of his roast beef sandwich was going to come back up.

“What’s going on with you?” Bryton asked.

Marty looked at Faruke carding his fingers in his dark black hair. The man was so fucking gorgeous. He was so tall and had muscles on top of muscles and those eyes… son of a bitch, Marty could look into those turquoise orbs for days on end and never get tired of it.

“You really like him, don’t you, Marty?” Bryton softly asked.

Sighing, Marty replied, “I can be standing clear across the room and just a look from him makes me hard as a rock, Bry. I don’t understand it. He is so not my type. He always seems angry. He snaps orders instead of asks. He thinks he can tell me what to do all the time. He’s just not the kind of guy I would look twice at no matter how sexy he is.”

“I don’t think he’s angry as much as frustrated and pissed. Valkin said that he and Marston were best friends. The three of them used to do everything together and the day that Marston showed his true colors, he killed two of Faruke’s guys and damn near killed him too. Then you have to add in the fact that they had to leave the only home they have ever known, leaving behind their friends, family… it just can’t be easy.”

Marty nodded, stood up and turned to Bryton. “I just don’t know. I don’t understand any of this. How did we go from two average guys trying to live in an average world, to trying to save the world with men from outer space who can shift into machines?”

Bryton snickered, “Well it did liven up our lives, that’s for sure.”

“Bryton, I’m serious. What do we know about any of this? Did you see the size of those men who attacked this place?” Marty asked in awe.

“Marty, our side is just as big and if you remember correctly, we kicked ass too. They didn’t leave here unscathed. You were amazing coming up with those machines to help Valkin and the others fight off Marston and his men.

Faruke suddenly made a sound. Marty quickly turned to see those beautiful eyes looking at him.