Keeping Her Close by Casey Diam 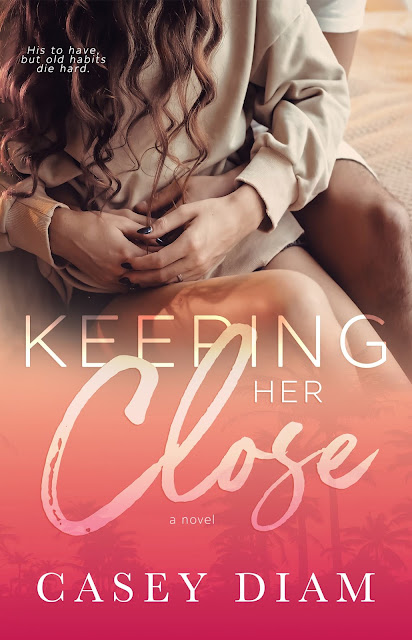 Brandon Kuvat gave up on love ten years ago—the year he was set to become a dad. A wealthy playboy pilot, he still sees plenty of action, but he’s not the man he once was. Or the man he wishes he could be. The first time he encounters Jordan, he knows immediately she is different. He also knows hurting her is inevitable. Still, he can’t stay away, even if it means he'll have to settle for a friendship—but only for as long as that can last.

Wounded by a disastrous relationship, Jordan Artesian has put her whole focus on work, nurturing her dreams of owning her own fashion line. But though her creativity blooms, the rest of her is still frozen, that is, until Brandon charms his way into her life. He's irritating, but somehow...intriguing. She hates that she finds his charming and challenging ways attractive. He isn’t supposed to make her feel things she’s given up on feeling.

For these two, friendship will never be enough—not when she’s what he needs to heal, and he’s what she needs to feel again. But can they find their way down the path of friendship to truly love and trust one another, or will they only destroy each other’s hearts all over again?

He handed her a glass and clicked his to hers. “To happiness and beautiful people.”
“And official first dates,” she added.
When she finished her glass before him, he poured her another.
“Is there a drinking contest I don’t know about?” he asked.
“No. I need it. I just remembered where we’re going, and I need to relax.” She frowned as she remembered her dates with Todd. They were always awkward. She was always the outsider with his smart lawyer friends, and tonight would be the same with Brandon. She wouldn’t know anyone. This was Brandon’s lifestyle and friends, and she was just an accessory.
“You shouldn’t be nervous. You’re with me,” he soothed, taking her free hand in his. His touch warmed her body. “It’ll be fun. I promise.” He kissed the back of her hand, causing her lower abdomen to flutter at the softness of his lips.
No, don’t do that, a small voice in her head squeaked. Tension spread out from his hand still connected with hers.
She swallowed champagne until a nice buzz settled over her. To letting go and starting over, she mentally toasted. Taking a deep breath, she relaxed into her seat and closed her eyes. “I feel it now. You need to get on my level.”
He chuckled. “Oh, really? And which level are you on?”
“Mmm, about level three and a half. Maybe four.”
He laughed. “I’ll be there with you in a few.” He released her hand, picked up the bottle of champagne, and started to chug it. But then he stopped. “On a second thought, I shouldn’t.”
“Why not?”
“Because I can’t be tipsy and alone with you in that dress in here. I’m already too tempted as it is.”

Some years ago, Casey rediscovered her passion for writing and hasn’t stopped writing since. Her favorite genre is romance with a little angst, which is why she writes sexy, funny, sweet, and emotional stories that are a bit more in depth, but so much fun to read.

Casey has a ridiculously short attention span and loves her coffee and tea without sugar and milk. Apart from reading or writing, she loves to snowboard, even when she’s catching an edge and face-planting in the snow. She absolutely loves it!