Genre: Historical, Regency (right after the end of the Napoleon wars) through Early Victorian

Despite her lack of dowry and cloudy past, Amy Winston becomes one of the most sought-after young ladies in the London marriage mart. Some desire her for her beauty and charm while others appreciate her unique skills of seeing with her mind, healing with her hands, and disappearing in plain sight. By her choice of husbands, she secures her safety. However, her marriage almost brings the English Parliament to its knees. 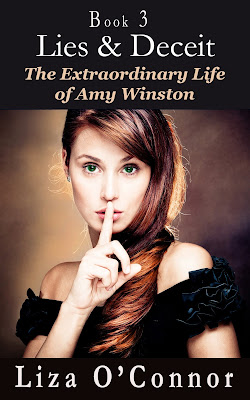 Amy studied the young man for a moment. “Are you an only child?”

“Not so much.” His forehead crinkled in annoyance. “Is there some point to your questions?”

Darby sighed and stared at the ceiling in exasperation. “She is trying to figure out why you are such a pompous ass and expect to have your way all the time. She has no doubt concluded from her three questions that you were spoiled by your nanny into a horrid monster of a boy who has no idea how to make or keep friends, and clearly from your display today, she will conclude you’ve not made much progress since.” He then looked at Amy. “You can move me to the fourth dance if you are still willing to give this brat a chance. In his favor, he’s a very good dancer and can be an interesting conversationalist, if you can keep him from talking about himself.”

Amy ran an arrow to the forth line for Darby and added JM on the third line.

“Why does Darby get more letters?” Marsh asked.

Amy laughed and added vsgd at the end of his initials for ‘very spoiled good dancer’.

“That doesn’t spell anything…”

At this point, Ann felt compelled to intervene. “John, you’ve got your dance, dear. Stop bullying Amy and leave now.”

For some, Amy is an angel incarnate; for others, she is the child of Satan. In her early years, Amy learns the skills of a soldier and discovers she can heal with the touch of her hand. Upon the death of her beloved Uncle John, he stays as a protective ghost to assist the soldiers in their vigilant efforts to keep her safe. Never has a girl arrived at Madam Cousec’s School for Young Ladies with more charm, more friends, or greater protection. She’ll need them all to survive the head girl and set her future in motion.

John turned his attention back to the girl. Her dark hair was wild and matted. In the center of the mats was dried caked blood. No doubt from the stones the townspeople threw.

He suspected the voice was not hers but a mimic of the people who had said these cruel words. Suddenly, her voice dropped lower in a mimic of a man and she quoted dark bible passages about casting out demons.

Dear God, was it possible these were her parents’ words?

Finally, he heard the girl’s own voice. The pain and misery it held tore at his old battle-weary heart.

“There is no name,” she cried. “There was no man. Only a dream while I rested on the banks.”

“Then it’s the seed of Satan and it’ll not be raised in my house!” her voice deepened and bellowed

Inside the bundle of cloth, she held tight to her chest, a baby’s wail rose, almost as if in protest to her words. The baby’s cry startled her and for one terrible moment, John feared she would toss the child over the edge.

Then her madness dissipated, and she transformed into a young mother fretting over her new child, soothing it with soft words, as she sat down upon the ground. She opened her filthy torn blouse and placed the baby upon her right breast, rocking the child softly while it nursed. Her face held love and adoration for her helpless infant.

John knew he must save this young girl and her baby. She was not yet lost to madness.


When Amy and her friend Domnika arrive in London, she discovers her guardian, Nicolas, is under the thrall of his ‘perfect’ wife. Neither is happy she has come. The only person who seems pleased with her arrival is the handsome valet, Antonio, who turns out to be far more than a servant.

Needing to escape her guardian’s care, Amy and Domnika take refuge at a fellow schoolmate’s home. Antonio leaves Nicolas’ service and becomes one of her many protectors. Unlike the other protectors, he becomes the first of many admirers that vie for her hand.

All the while, Nicolas continues to prove over and over that he is not the fine fellow her uncle had thought.

As Nicolas and his valet, Antonio, sat on a bench overlooking the docks, Antonio interrogated him about Uncle John’s niece.

“Frighteningly so. By now I suspect she knows more than most doctors in London about medicine.”

“I hardly would call it a practical vocation,” Nicolas objected. “No one will ever accept a female doctor.”

“I suppose it depends upon the situation. The next time I get stabbed or shot, I’ll be most glad to allow her to tend my wounds.”

“She’s the colonel’s niece. That’s all I need to know.”

Raised in the southern mid-section of U.S., Liza escaped to the East Coast once out of college. She’s worked as a journalist, a radio DJ, a security guard, a stock broker, a strategist, and a business solutions consultant to name a few of her many occupations.

She learned to fly planes, jump out of planes, hang-glide, kayak and scuba dive, to name of few of her ‘let’s kill Liza’ sports. However, her favorite activity is to hike with her dog Jess among the shaved mountains of NJ.