Under Control by Laura Catherine

Nix, Grace and Phoebe are having problems with their new elemental powers. They keep losing control and sooner or later they are going to get caught or hurt someone.
When Nix gets grounded from preforming a gig, after having a fight with her boyfriend and accidentally starting a small fire, the girls come up with a plan to practice their powers and regain some control.
Kendra, on the other hand, is shutting everyone out. Despite Phoebe's best efforts to get through to her, Kendra wants nothing to do with magic or Ivalice, but she can't hide away forever because Morgan is desperate to find a way to Earth and take back the elements. As he gets closer to a solution Morgan’s obsession grows and begins to come at a cost. 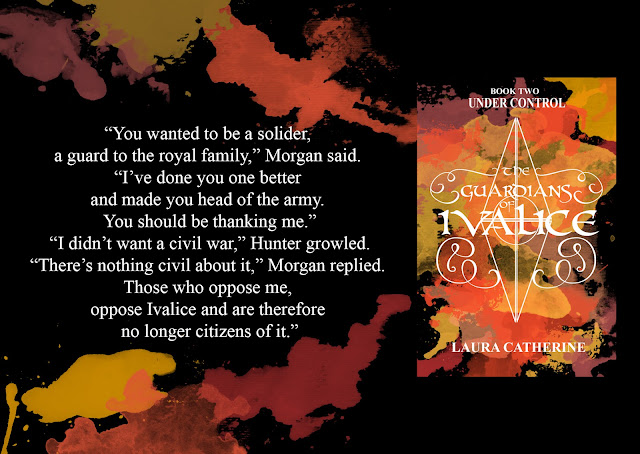 Laura Catherine was born in Melbourne, Australia where she spent most of her childhood creating fantasy worlds and talking to her invisible pet cheetah who ran along powerlines. She completed a Diploma of Writing and Editing at Holmesglen Tafe where she learned a lot about turning her stories into actual books instead of just ideas hidden away on scrap paper in her desk draws. Laura self-published her first novel, Djinn (2013), a Paranormal Romance, and the second in the series, Blooders (2015). Her latest release was for a new YA Fantasy series, The Guardians of Ivalice (2017). Laura is currently working on the next instalment in the Djinn series, Bloodjinn, as well as book two in The Guardians series.