A PROMISE TO SADIE by JJ Ellis

PLEASE NOTE: This book deals with teen issues and situations. There is mention of rape due to an abusive relationship (nothing graphic). There is also a theme of teen pregnancy and some "fade to black" petting. 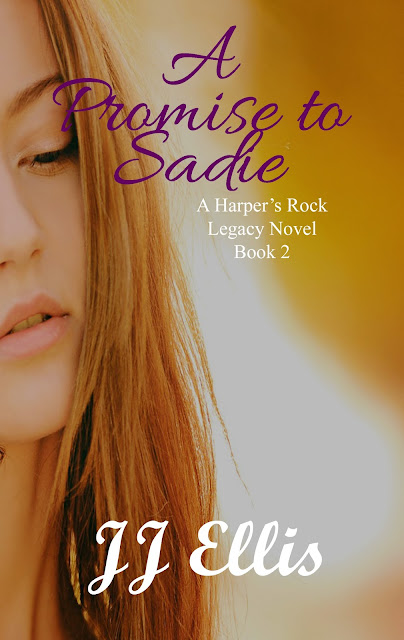 By the time Thanksgiving rolled around the snow had returned to Northeastern Wyoming and they couldn’t wait to spend the weekend at the Harper Ranch horseback riding and snowmobiling. “So, are you ready for this?” Michael asked Sadie as they pulled into his grandmother’s driveway.

“Yeah, I can’t wait. I love your large, crazy family.”

“And they love you. I personally can’t wait for tonight. You’re going to love the surprise I have for you.”

“You do know that I’m not fond of surprises, don’t you?”

“I know,” he smirked. “But this one is amazing and I gave you a hint.”

“What, that it involves nighttime, a snowstorm, and a snowmobile? That tells me nothing.”

“It’s all you’re getting, SaySay. And I promise you’ll love it.” At least he hoped she would. It was time to confess his feelings and hope for the best. Tonight was the night.

“Well I better,” she teased. “Or there will be hell to pay.”

Michael opened his door and slipped out of the car. When Sadie didn’t follow, he leaned back in. “What, you’ll make me eat your cooking?” Sticking his tongue out at her, he turned and fled into the warm, cozy house. Sadie was right on his heels.

“Nothing, Grandma,” Michael said with a big smile. “I was just telling Sadie how much I love her cooking. And she was telling me how sweet I was.”

“Well isn’t that nice,” Evie enthused as she pulled on Sadie’s hand. “I was just saying how I wished I had someone who could help cook half of Thanksgiving dinner for me. Come into the kitchen and I’ll get you an apron.”

Sadie couldn't do anything but follow her as she looked back at Michael in horror. “Uh...Mrs. Harper, I really can’t cook.”

“I figured, dear. We’ll just let my naughty grandson stew in his juices for a while.”

Sadie smiled and relaxed. “I can’t cook but I’m a good helper.”

“I was counting on it,” Evie smiled.