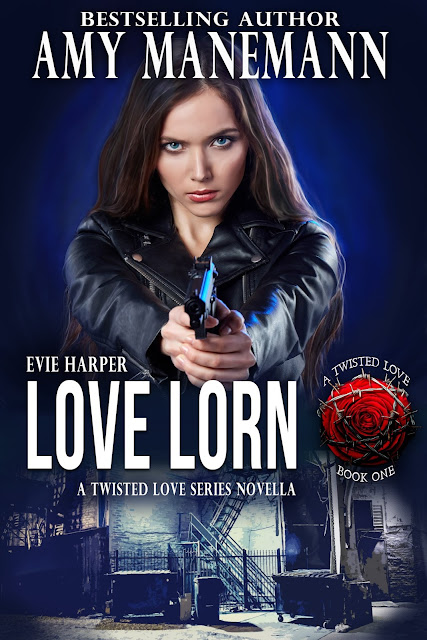 Determined to prove she’s more than just a pretty face, Detective Evie Harper works hard and trains even harder to be the very best. Her first homicide case will put her skills to the test as she and her partner, Detective Stephen Harris, track a ruthless serial killer terrorizing the west end of town. The Lovelorn killer may be one step ahead of them, but they’re closing in fast — until an immoral decision is made that leaves their partnership hanging in the balance.

Love Lorn, is the first book in a six-book series called The Twisted Love Series. While this book was written by me, Amy Manemann, the second book, Love Torn, will be written USA Bestselling Author, Stacy Eaton. The two of us have worked together on these two books so our stories run parallel and prepare you for the first full-length novel in the series coming this fall. Stacy's prequel to our series will be releasing May 19th.

The first full length co-authored novel, Love Inked, will introduce author Amy Manemann’s Detective Evie Harper with author Stacy Eaton’s Kali Mann as they become partners. Their lives are about to change, and the cases they will investigate will be intense. Between a new serial murder and dealing with their pasts, these two will be tearing up the streets and the pages as they deal with Twisted Love.

Love Inked is slated to release in later Summer/early Fall.

He veered on the path, his footsteps leading toward the large fountain. My ears picked up the screech of tires and fading wail of sirens behind me. I knew without looking that back up had arrived, and I was relieved to have some actual police officers arriving on the scene.

My relief was short lived when his grip suddenly tightened on the girl, and he pressed the knife harder against the side of her throat. A thin red line appeared, blood trickling down her neck, and the girl cried out, tears spilling over her round cheeks. “I said get the fuck away from me!”

God damn it…I jerked my gaze to see a twenty-something-year-old-looking hipster hugging the side of a park bench close to Douglas. He wore an odd-shaped stocking cap that was pushed low over his forehead, and he had the determined look of a man about to do something really heroic that would probably get someone killed.

“Back off.” I growled the warning low, relieved when the baggy pants, want-to-be-a-hero hipster begrudgingly backed away. I knew what he was thinking; the guy was distracted, so why not try to make a play for the girl? Except Douglas was a lot smarter than that, and I had the feeling he would plunge the knife in the side of the girl’s neck faster than anyone could make a move.

“See, Donovan, everything’s good,” I reassured my suspect once I was certain nobody else was going to play hero. “No one is getting close.” We were a good distance away from the park entrance now, but the sound of fast moving footsteps beating the pavement told me help was close at hand. Normally, this would be the time when I would back down and gladly allow the hostage negotiation unit to take over, but this guy wasn’t playing with a full deck. Trying to rebuild a rapport with him may do us more harm than good.

Something, or rather, someone, shifted in my peripheral vision. I spared the man a quick glance as he worked his way behind a statue, recognition instantly sinking in. Even in his street clothes the intimidating profile of Detective Stephen Harris was noticeable. His dirty blonde hair was covered by a Philadelphia Eagles baseball cap set low over his brooding eyes as he quietly assessed the situation. Where he came from was hard to say, but he didn’t look happy. In fact, he looked downright pissed off. I could relate.

“You don’t get it. It doesn’t matter.” Douglas sucked in a deep breath, eyes wild. “It doesn’t matter!” The scream echoed around me, and I watched him take a step backwards, the backs of his knees hitting the fountain. “I’m fucked, and there’s nothing you can do about it.”

“Donovan, there’s always another solution, but I can’t help if you don’t let me.” I quickly scrambled to regain control. My eyes connected briefly with Harris’s, and I could tell he was thinking the same as me. We were losing ground.

From his position, Harris was in Donovan’s blind spot. Three more steps and Harris could easily overtake him, if Donovan didn’t lose his cookies before then.

“It’s too late. Too late.” Donovan glanced down at the rippling water behind him before looking back at the crowd of uniformed officers who had reached my side. He appeared to be weighing his options, which weren’t good. I took advantage of his altered gaze to step closer.

“It’s never too late to the do the right thing,” I continued, barely breathing. “That little girl didn’t do anything wrong, Donovan. Why don’t you let her go and we can talk about fixing all of this.” I shuffled closer.

Donovan shook his head, lifting his foot to rest it on the edge of the fountain. “You can’t fix a dead man.”

Detective Kali Mann lives by her nickname: The Mann-Eater. She’s a true love them and leave them with no attachments—ever. She’s hard-core, to the point, intense and she doesn’t always play nice with others. When her partner, Keith Harvard, finally gets her to take notice of him, the case they are working goes awry, and suddenly Kali is having emotions she’s not sure she wants. A major part of her past will come back to haunt her and just as she beings to open herself up, her life will be torn apart.

Love Torn is the second book in the Twisted Love Series. The first book, Love Lorn, was written by Amy Manemann. If you haven't read it, nows the time to so that you have the backstory on Detective Evie Harper when they two characters are partnered together in Love Inked.

Amy Manemann is an International Best Selling Author. She writes sexy and intriguing romantic suspense, contemporary romance, young adult paranormal romance, and dabbles in children's books. She resides in her hometown along the Mississippi river with her husband and their two children. When she isn't plotting her next book, she enjoys spending time with her family and friends, and diving into a good book. 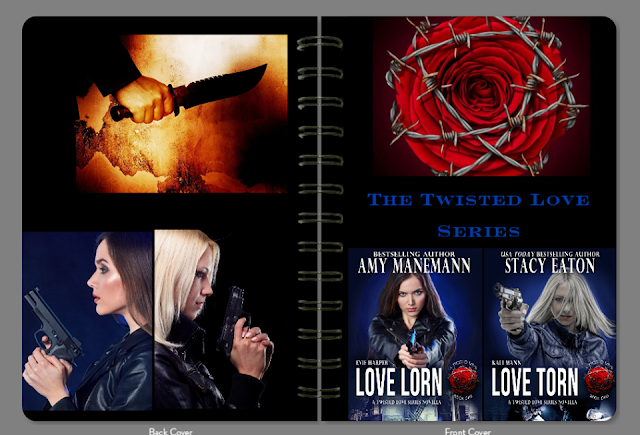