WORKING THE COUNT by Jeanine Binder

WORKING THE COUNT
by Jeanine Binder 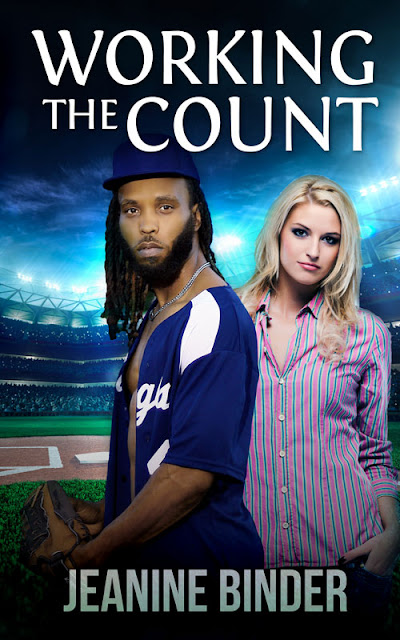 Working the count (definition) - When a batter is patient in his at-bats and tries to get "ahead in the count" or to get a pitch that he can hit hard.

Montero Salazaar was a master of this in his private life. He was always looking for the home run and never the strike out; contrary to how he wanted things to go when he was in a game. Being a major league pitcher only helped to enhance the number of girls wanting him in their bed and he knew how to lay down the smooth line at the exact right time. His life was an open book – at thirty-two years old, he had all the time in the world to play and have fun, making his presence known on every tabloid imaginable. Each day brought the promise of a new encounter, leaving him sated and satisfied without having to look in the rearview mirror.

But then came Casey and his aunt, Annie. Being with her, he felt like he had been doused with a vat of ice water and now wide awake - looking at life (and love) so differently. Montero wasn’t used to women who weren’t throwing themselves at him and how could Annie be changing him so dramatically? And why was he suddenly more interested in spending an afternoon coaching an eight-year-old with baseball tips than finding someone to spend a sexy night with?

Was this his one chance for love rather than being destined for one-nighters? Can he really change and make himself a solid person for Annie to love? Or were his teammates right and this would all blow over like a late-night storm with no true love in sight?

“What’s up?” Montero asked cautiously, setting his phone back down on the locker floor, looking the guys over to make sure they didn’t have anything to spray him with, or dump on him. Practical jokes were a way of life in the locker room and you had to always keep your guard up. All four of these guys were ganging up on him – all bets were off. He knew they had an agenda of some kind.

“Salley,” Mike Robbins, the first baseman started. “Salley” was the nickname his team all called him as a joke, which didn’t bother him. Some of his teammates had worse nicknames and he knew they’d thought they were being cute by giving him a girl’s name. “You’re up to something and we want to know what. You know you can’t keep secrets from us.”

“I have no idea what you guys are talking about,” he retorted, but couldn’t hold back the smile on his face. He knew he should keep a poker face, but something inside wanted to tell his team the truth. He was feeling good about his relationship and he felt he could talk about it openly. Now might be the opening he’d been waiting for.

Mike pointed his finger at him in an accusing manner. “That’s what I’m talking about. Look at that shit-eating grin on your face. Give it up, Sal. What have you done?”

Montero wavered, going over the pros and cons in his mind, whether to tell them about Annie. He was still surprised at the whole relationship himself and he knew he was in for an onslaught of teasing from his teammates once he came clean with them. But he didn’t have a clever way to dodge the situation and figured they’d all have to know sometime. He took a deep breath and blew it out, facing his teammates and swallowed once before starting. “Well, I sort of have… a girlfriend.”

There was silence for a moment then the four guys around him just burst into laughter. The kind that makes your eyes water and your stomach hurt. Montero watched patiently as they all dropped either onto the bench beside him or onto the floor – the hoots of their amusement making him wish he’d just kept his mouth shut. It was inevitable they would find out and he’d figured he’d take the easy way out by telling them, but from the sound of things, that was even going to go south on him. He wasn’t finding their laughter very amusing, trying to be tolerant until they were finished. He knew this was coming but still…

“Not sure what’s so funny,” Montero interrupted.

“That has to be the best thing I have heard all week,” David answered. David Ruston was a reliever – usually brought in at the seventh inning to carry on for the starting pitcher, and had followed Montero on the field more times than he could count. “Montero Salazaar with only one woman – Salley, I can’t get my head around that thought. And I know this has just got to be some whim you’re on. A dare someone made? Or a bet...that’s it. Someone is paying you to do this…”

“No one’s paying me to do anything and it’s not any kind of bet,” Montero said, fixing David with a stare. “This is a whole new world for me. I haven’t been to a club or out with another woman in almost three months. Tell me that isn’t serious, thank you very much.”

Mike nudged David in the ribs. “She must be a hot tamale in bed then.”

The guys all went back off in another fit of laughter. Montero stood up, finishing getting dressed. He was too tired and cranky to continue feeding their amusement. He’d earned every bit of their disbelief and harassment, but he didn’t need to have it all tonight and he wasn’t interested in taking anymore. “Laugh it up guys,” he said, finally. “If you want to see for yourself, get off your asses and come down to Riverside Ball Park at four tomorrow. You can meet her and then you’ll see I’m legit.”

Just as he got to the locker room door, he heard Mike’s voice behind him. “It won’t last, Salley. You don’t have the moxy to commit to just one woman. I give it another couple of weeks at most – things will be back to normal. I’ll even put a C-Note on it.”

I’ll be at the Booking in Biloxi event – March 24th at the IP Casino, Biloxi, Mississippi.

I'll have signed copies on the table for $7 and you get to meet DeLonn Donovan (the model on the cover). 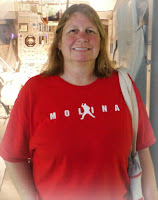 Jeanine Binder grew up in a small town in California on the outskirts of Palm Springs, where the Hollywood celebrities liked to vacation. After thirty years, she packed up, moved to Arkansas where she still lives today. Her hobbies include her writing, reading good books, and seeing exotic places (loves to go on cruises).

Writing has always been a passion and hoping the next twenty years will bring many enjoyable books for others to read.