The Price: Greyson and Sasha’s Story by Ruby Rowe

Pre-order for only 99c 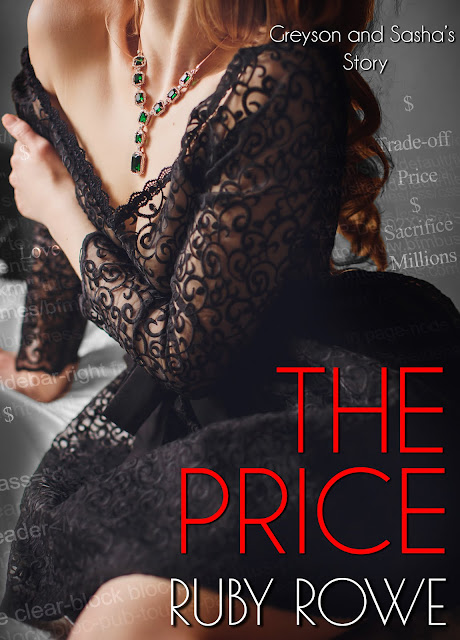 THE PRICE: Greyson and Sasha’s Story (A Novel Addition to The Terms Duet)

SYNOPSIS
Greyson Burke had become my everything.
He paid for my drug rehab and put a roof over my head.
He provided me with a job and showed by example
how hard work and responsibility could lead me to greatness.
He said I was strong, pretty and smart.
He professed his love for me and claimed I’d be his forever.
I believed Greyson could do no wrong until I learned
of the astonishing decision he’d made.
In a breath, my beautiful new world went up in
flames, and my instinct was to run from the fire.
Nothing could snuff out the truth; the fact I would
never be enough for him. How could I be after all
he’d given up?

The Terms Duet must be read prior to this novel.

and references of past sexual abuse to one of the characters.

Ruby Rowe began writing in January of 2013
under the pen name Scarlet Wolfe,
releasing contemporary and young adult. She soon tried her hand
at writing erotica romance and fell in love with the genre.
The pen name Ruby Rowe came about
in 2017 when she decided it best to keep her racier books separate from
her young adult romances. She’d like to branch out and release straight
erotica; however, she’s a romantic at heart, and believes it will be difficult
not to include romance in every story. When not writing, Ruby reads naughty
books about possessive, hot alpha males. She has an addiction to
Pinterest, pinning all the sensual photos she can find. She loves bacon,
coffee, and other flavors of ice cream besides vanilla. ;)
She hopes her writing
will allow her readers a reprieve from the real world,
giving them an opportunity to
live out their fantasies.
CONNECT WITH RUBY
Facebook|Twitter|Instagram|Pinterest
|Goodreads|BookBub|Website
Posted by blogger_rach at 02:30