RAINBOWS IN THE MOONLIGHT by Ryan Jo Summers

RAINBOWS IN THE MOONLIGHT
by Ryan Jo Summers 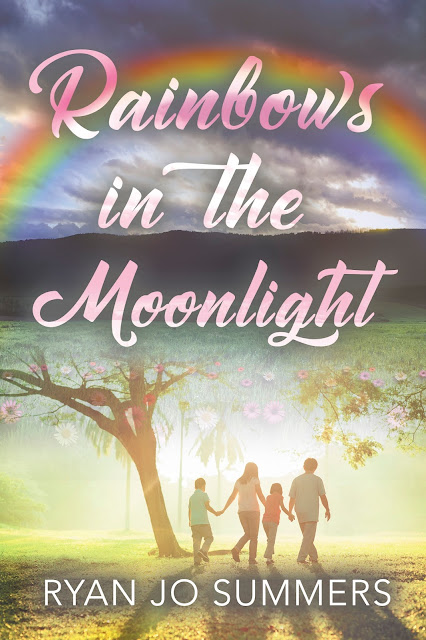 Fresh from prison, Dalton Clayton needs a job—and just about anything will do.

Divine Intervention steps in and tosses Koda and Dalton together. Koda struggles with the conflicts of her impulsive decision to leave her babies with an unknown, convicted felon. That just can't be wise, can it? But she can't help but see how quickly the children bonded to him and trust him. Or the reassuring sense that this is just right.

Meanwhile, Dalton stumbles through the spills and thrills of two young children, and his growing interest in their mother. A chance meeting brings him back to his estranged family as well.

Over time mutual attraction forms between Koda and Dalton as the bond between Dalton and the children deepens. A sweet, southern romance full of forgiveness, second chances, and fun kids.

“Guess what I got today at work?,” Koda said. “My winter raffle prize.”

She shrugged. “It’s late in coming.” She explained about the heirloom casting. “I have the brochure inside. Apparently the idea is to have the family members do something like join hands or somehow get into a position while the artist makes a plaster cast. Once it’s dried and detailed, the end result is a permanent item. I guess people do baby’s feet and hands, joined hands for families, paw prints, whatever is important to each family. One of our doctors went there with her husband for their anniversary and had their joined hands finished in bronze. That’s how the company got involved with the raffle. I had thought to do the kid’s hands somehow. So I need to call and get a sitting scheduled for the kids.”

“And you, Mommy,” Ruthie declared, having run up while Koda was describing the casting. “You gotta sit with us and be casted.”

“Yes, probably. Certainly. Though I had originally thought of just you two.”

“What about Dalton?” Terry asked as the puppy danced between his feet.

Pink touched his cheeks as his surprised, embarrassed look met hers. Koda wondered if she was blushing as much as he was. Hopefully not.

“Well, Terry, guys.” She faltered, scrambling for something to say. “Family in this sense is usually . . .”

Ruthie wrinkled up her nose and Terry tilted his head, watching the puppy chew his shoe. “But you’re here every day, doing things with us. We spent Sunday with your blood family. Don’t that make you family too?”

Koda felt tears pricking her eyes at her son’s assessment of family. She wanted to hug him. Dalton beat her to it.

“Come here, Buddy.” He knelt down, beckoning both to his side. “You too, Cricket. Now look, family is the people you came from, that you’re a part of.”

He smiled at Ruthie’s words, and Koda put her fist to her mouth to keep from crying. The tenderness of the scene rocked her like only those three could do. Her children’s honesty and innocence left her weak. Dalton’s gentleness left her breathless.

“You’re right. I’m a part of you, both of you, but I am not family. That’s your mama and your grandmama. Just like my mama and daddy and sisters are my family. And Carlos and the boys become our family when Carlos married my sister and they had the boys. That’s how you make a family.”

Terry and Ruthie stared at each other. Ruthie grabbed Dalton’s hand and shook it. “You can marry Mommy and then be our family for real.”

A sob escaped Koda and Dalton glanced up at her, puzzlement in his eyes.

Ryan Jo Summers is a North Carolina writer who pens romances with a twist. They may contain any number of elements: Christian, humor, mystery, paranormal, sweet, shape-shifting, or time travel. Her dad is a songwriter and his aunt wrote poetry so writing must be in the family genes.

She makes her home in a century-old mountain cottage, with a menagerie of adopted pets. In her spare time, she likes to gather with family and friends, paint ceramics or canvas, potter in the yard, bird-watching, or read, play chess, Mahjongg or work word-find puzzles. She might take her dog and head deep into the forests and rivers near her home to plot the next big scene or story. Like her dad's aunt, she writes poetry as a means to cope with life's pains.

She collects lighthouses, shells, driftwood, and anything to remind her of the shore.