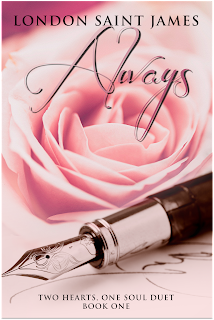 International bestselling author London Saint James’ first installment from Two Hearts, One Soul Duet is the epic tale of abiding love, heart-wrenching loss, and an astonishing bond that will find a way to endure.

Winter Perri never truly understood love until she met Austin Carlyle—the man who would rock her world to its foundations and give her something to believe in. But the night before they were to be married, the fairytale shattered.

Thirteen years later Winter is pulled out of her seclusion only to have a painful past confront her, and when it does, she’s left questioning reality, because the impossible is looking back at her with the face of a destroying angel, and piercing eyes in too familiar shades of blue.

The invitations read in elegant, black script.
I’d graduated from college and just turned twenty-two. Austin was twenty-three. And yes, in just a few weeks, we were having a wedding.
Sitting on the third finger of my left hand stood a three-carat ring with three square-cut diamonds encased by emeralds, with more diamonds embedded in the band. It was more money than should have been spent, but Austin said it was a diamond for every year we had been together and the emeralds matched the color of my eyes.
Who could argue with that?
The night Austin proposed to me was not only a surprise but one of the best nights of my life. He’d taken me to the East Village Theater—something not out of the ordinary—we’d been there many times before. In fact, it was the place he took me on our third date.
What was out of the ordinary? The place was vacant.

Walking in the dim light down the long aisle, passing row after row of empty seats, I glanced up at Austin. “There’s no one here.”
He smiled down at me. “I know.”
“What’s going on?”
As though I’d asked the magic question, one beam of streaming light hit a gold-encrusted table up on the darkened stage and glittered.
I focused on the table. It was part of a stage set I’d seen once, sitting in Juliet’s bedroom when Romeo entered in through her window.
“Is this your way of telling me you’re the lead in a new Romeo and Juliet play?”
Austin chuckled but didn’t answer as he led me up on the stage and over to the table.
On top sat a single pink rose with a dazzling ring shimmering in the light that had been tied to the long green stem with a red silk ribbon.
My hand went to my mouth.
I was speechless and more than likely wide-eyed when Austin picked up the rose, untied the ribbon, took the ring into his hand, bent down upon one knee, then handed me the flower.
With shaking hands I took it.
He quoted a scene from Romeo and Juliet, only he’d said my name not Juliet’s as the sun.
Taking my left hand in his, Austin looked up at me from beneath his long, black lashes with eyes the color of sapphires. “Winter. I’m in love with you. I cannot imagine one day without you in my life, so I was hoping you would do me the honor of becoming my wife. Will you marry me?”
Reacting to the moment, my eyes began to overflow with tears. They streamed down my cheeks, dripped off my chin, and hit my hand in his in a sprinkle of abundant joy.
“Yes,” I said.
Austin placed the ring on my finger and kissed it. “I love you.”


He returned to his feet, his face beaming as I sniffled out, “I-I love you, too.”

*Read For Free with Kindle Unlimited 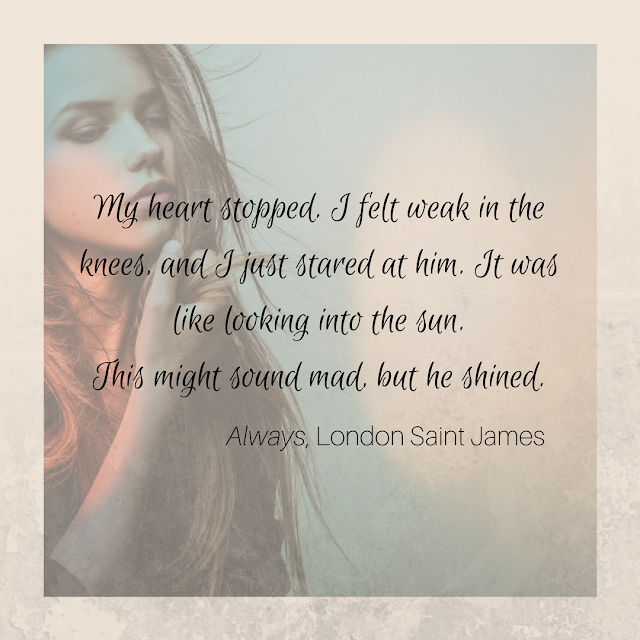 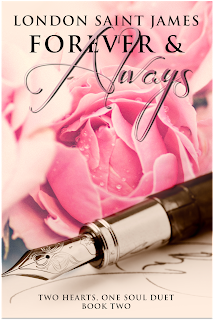 From international bestselling author London Saint James comes the final installment of Two Hearts, One Soul, a breathtaking story of two people who have always been connected, forever tied together by fate, by destiny, by unbreakable love.

With the media hell-bent on exposing Winter’s once private life, Cayden will do anything to protect her. But there’s more than just the voracious paparazzi conspiring against them.

Involved in an unprecedented web of strange events, and wound in a string of lies about to break with devastating consequences, Winter must battle ghosts from her past that threaten to harm the man she loves.

Faced with a choice she always knew would be inevitable, and a secret of her own, can the fairytale Winter’s been living with Cayden beat the odds of their reality and really come true?

A breeze blew into the bedroom from the open balcony doors—crisp and clean. The details of winter lingered with just a hint of spring to come, giving the warm room a punch of coolness as early morning sun slanted across the foot of the bed, highlighting the sheets in disarray.
My gaze shifted over to Cayden, sitting at the writing desk, phone in hand, speaking to someone about his upcoming film shoot. When his current film was done, he would be heading to Vancouver.
Would I be going? I didn’t know.
Leaning my hip against the doorjamb of the bathroom, I watched him, how his body moved—the muscles that flexed in his arm when he picked up a script from the desk. He was quietly confident, his movements fluid. No doubt, Cayden was something to watch even in such mundane things.
So very much like Austin.
Walking quietly out of the bathroom, I went to him, not wishing to disturb him, but desperately wanting to touch the man of my dreams. In many ways, he still seemed unreal to me, as if he were an optical phenomenon that could liquefy into hazy lines of heat and disappear.
With the phone to his ear, Cayden turned and looked at me, his sapphire gaze roaming from the hair piled in a messy bun atop my head, to my bubble-gum-pink-painted toenails before he smiled.
My heart thrummed.
Reaching out, he pulled me onto his lap where I willingly went, and picked up a pen from beside my laptop. Then, he crooked his head, holding the handset to the cordless in place against his shoulder to free his other hand and took a hold of mine.
Curious, I wondered what he was up to.
Cayden turned my hand over, palm side up. Swiped his fingers softly over my palm once. Wrote, I Love U, boldly across it. And then he curled my fingers closed, securing the words tight within the palm of my hand before he moved his hands from mine and took hold of the handset again.
My heart, not to mention my body, felt as if it would explode from the joy those three little words inspired. But the fact he wrote them, tattooed them onto my skin, was simply the sweetest thing he could have done.
“Go ahead and e-mail it. I’ll take a look,” he said to the person on the other end of the phone.
There was a pause. A buzzing followed by another pause.
“Sure. Not a problem,” Cayden replied, motioning for me to get up.
When I did, he adjusted the hard, straight-backed desk chair as well himself, and patted his lap.
Wearing nothing but a towel, I straddled him, chest to chest, and placed my arms around his strong shoulders. “Good?” I mouthed.
He winked his approval.
I played with the ends of his hair, feeling the impressive bulge beneath his designer sweatpants jerk against my bare core.
Blood raced through my veins with a start.
“Yes,” Cayden said into the phone. “I’m planning on it, but we can talk about that later.”
There was another pause, more humming sounds, then one of his hands went to my backside and squeezed. “Okay, thanks,” Cayden said.
He hadn’t been talking to me, but to whoever was on the phone.
“I will. Enjoy your breakfast.” He punched the end button and placed the handset into the receiver on the desk.
“I didn’t mean to disturb your call. I realize it was business,” I said. 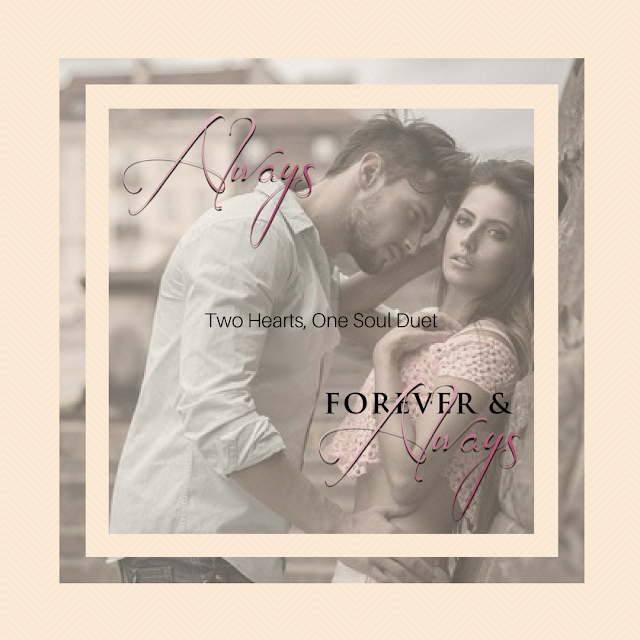 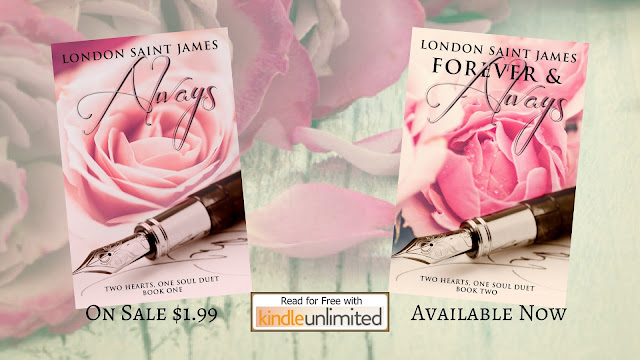 London Saint James has lived in many places, but never felt “at home” until she met the real-life man of her dreams and settled down in the beautiful Smoky Mountains of Tennessee. London lives with her husband and their fat cat who thinks he owns them.

As an award-winning, international bestselling author, London is living her childhood dream. She knew all the scribbling she did, that big imagination of hers, and all those clamoring characters running around in her head would pay off someday.