PRINCE OF FOOLS by Nancy Gideon

PRINCE OF FOOLS
House of Terriot, book 3
by Nancy Gideon 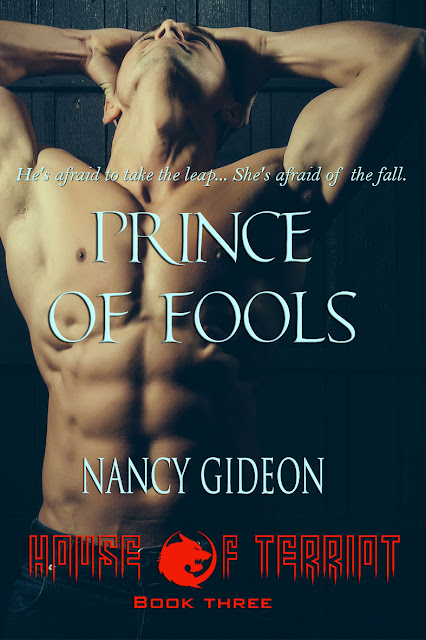 A dark prince to her Cinderella barmaid . . .

Rico . . . Prince in the shapeshifter House of Terriot

Reckless, hotheaded Rico Terriot seeks purpose and a sense of pride training the resentful guardians of New Orleans to defend a city besieged by a deadly outside force. Torn between his desire for his brother’s mate and the woman tied to the child of another, protecting their future happiness means denying his own on a dangerous path to redemption.

Amber . . . a single mother hiding a terrible past

Rico Terriot was the stuff of dreams . . . lately all of hers. But there’s no happily-ever-after for someone living in the shadows, protecting dangerous secrets that threaten her and her daughter. Dare she believe in a fairytale prince when he comes to her rescue, not knowing the price he’ll pay for making her troubles his own? From world’s so far apart, is love strong enough to hold them together . . . and keep them alive?

“Utterly captivating 5 Stars, Prince of Fools is intense, fast-paced, paranormal romance/suspense at its best - A stunningly raw, heart racing story that held me in a trance from cover to cover!”
-Cross My Heart Reviews

Amber stood motionless in the kitchen, paralyzed by grief and fear and loss.

It was over. The dream, the desire, the hopes that they'd become more. Rico Terriot was a luxury she couldn't afford. She'd been kidding herself, lost in the fantasy that they'd ever become more than convenient lovers. He wasn't staying in New Orleans, and there wasn't the slightest chance he ever intended to take her—them—with him when he returned to his mountain. Terriots weren't accepting of those not of their clan.

Rico hadn't gone out of his way to seduce her, quite the other way around. She'd taken advantage of his broken heart, made herself available then invaluable, as his friend, as his pseudo-family, as his willing bedmate. He'd probably never considered taking their relationship beyond the sheets and certainly not beyond the perimeter of the Quarter. It was all a blissful interlude to him before being called back to his real life. Leaving her and Evie to face the ugliness of their own.

She stood panting in the center of her kitchen, her sense of security torn away by a single, paralyzing fact. They were still looking. How long before they found her? Was she putting Rico in greater danger by mere association?

They’d have to leave New Orleans. Every second from now on was borrowed time. She couldn’t just run, not with a child to consider. The time to plan for a quick escape started now, this minute, ticking down toward what could be their last.

From now until she went into work, she’d go over her savings, quietly see how much she could get for the house, and start creating a believable lie for leaving everyone she loved behind in a hurry. Then they’d disappear, both her and Evangeline. Or they’d be as good as dead.

The thought again flashed through heart and mind to go to Rico. He’d get them out of the city if she asked.

No. She couldn’t involve him, not while he was within reach of those who meant her harm. He was wrapped up in his own intrigues, and who knew if one spilled over into the other. But if she ran without explanation, he’d follow. She knew he would. So, she’d have to make sure he wouldn’t want to.

Survivor’s instincts that had kept her alive and Evie safe kicked into place, setting in motion the pattern of cool, sharp, unemotional thought that would carry them away from harm and all they’d ever desired. 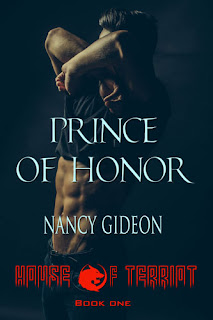 Could the bargain they made to save their lives become their reality?

Strong, silent man of integrity content to serve his new king as a prince in the turbulent shape-shifter House of Terriot. A tracker and relentless hunter, he’s used to running trails alone until charged with returning a traitor to their mountain top home to face the unforgiving judgment of their clan. Isolated with the bad girl he’s loved forever, the choice between duty and desire has never been more difficult . . . or deadly.

Manipulative schemer or victim caught between a mother’s ambition and a rogue prince’s lust for power? Trust is almost as foreign as the idea of love, but to save herself from certain death, she must risk both on the good man who deserves them . . . from someone worthy. Trapped by the only one who believes in her goodness, she must betray him and run for her life . . . or stay and destroy him with a long hidden truth. 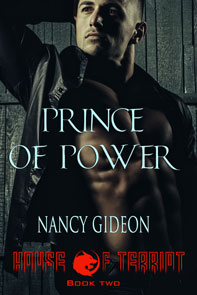 Obsessed with an enemy - the only female to ever walk away from him . . .

Colin . . . Prince in the House of Terriot

Brawny, cynical negotiator for his clan, Colin Terriot sees a move to New Orleans as an escape from a painful past and his reputation as a legendary lover. What he didn't expect was to fall hard for a rival spy, the female who tricked and betrayed him by leaving his bed for his brother's. Now, he now must work with her, up close and personal, as the envoy for her clan. Things are about to heat up.

Determined to have him - even if having him means losing all . . .

Denied her rightful legacy, Mia Guedry plans to stake her claim over the bodies of those who killed her family. But best laid plans fall before her desire for the one male she can't resist, the one who will never trust her once burned by her necessary deceptions. Saving her Terriot prince from plans already in motion may cost more than her inheritance . . . the price could be her life.

Nancy Gideon is the award-winning, bestselling author of over 60 romances ranging from historical, regency and series contemporary suspense to dark paranormal, with a couple of horror screenplays tossed into the mix, and is currently testing the “Hybrid Author” waters of self-publishing. When not at the keyboard, this Central Michigan writer feeds a Netflix addiction along with all things fur, fin and fowl. She also has written under the pen names Dana Ransom, Rosalyn West and Lauren Giddings.