ALL I WANT FOR HALLOWEEN by Marie Harte

ALL I WANT FOR HALLOWEEN
by Marie Harte 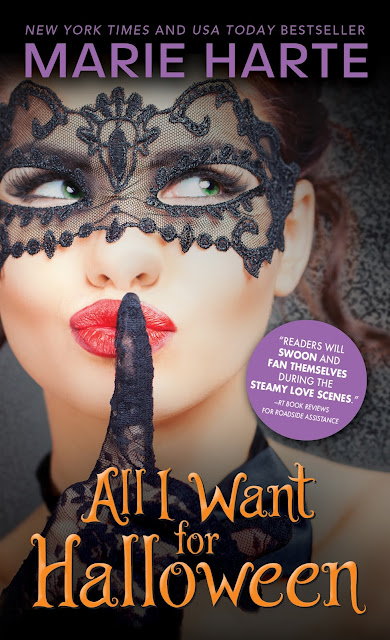 Tonight, she plans to let go.

Dressed up and anonymous, Sadie Liberato feels powerful, sexy and free. Where better to lose herself than a masked party?

Gear Blackstone's cheating ex and scheming best friend have managed to spin his life into a serious downward spiral. At least with a mask on he can cut loose for one night. And cut loose he does―with the sexiest, snarkiest chick he's ever met.

After a scorching-hot encounter, Sadie and Gear are desperate to find each other in real life. But can the heat last when the masks come off?

“Harte pens a sizzlingly sexy romance that is both playful and meaningful, exploring real and metaphorical masks, perception, and reality.” KIRKUS

They talked with their mouths full, making fun of the drunken genie as well as several unsuccessful hookups on the dancefloor.

“Oh, now that had to hurt,” the devil said. “Rejected by a zombie and her warty witch friend.”

He shrugged. “You have a sword. I have a pitchfork…somewhere. I think I left it by the bar.” He glanced across the room. “But hey, I have no plans to tangle with your brother. I’m here to sin until this thing is over. Nothing else, and no fights,” he paused, and she swore he added something else under his breath.

At that moment, her brother appeared in the crowd, his gaze searching.

She took Devil by the waist and turned him, noticing how he tensed but ignoring it. “Sorry. I’m having fun not mingling, and my brother is right over there looking for me.”

He relaxed and glanced over his shoulder. “Which one?”

“See the Phantom? He’s a pain in my ass, much as I love him. I didn’t want to come to this tonight, you know.”

“Yeah? Me neither.” He stayed where he was, still watching the dancefloor. “Uh oh. He’s looking over here.”

“Crap, crap, crap. This is a primo spot!” She did what any smart woman in her situation would do. She turned Devil so he completely blocked her from Elliot. “I need to blend in. Work with me, would you?”

She wrapped her arms around his thick neck and dragged him down for a kiss.

At the taste of his lips against hers, she shuddered, not having expected he’d taste better than his beer, or that up close and personal he’d smell like man and sex and chocolate. Chocolate?

Jesus, she must have had too much to drink.

Then he dragged her closer and deepened the angle of their kiss.

Sadie forgot about her brother, about the last cream puff on the plate, about how much she didn’t want to be at the party.

And fell into the arms of a man who kissed like the devil himself. 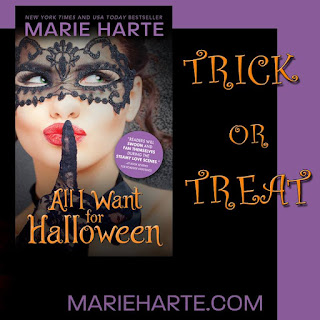 Caffeine addict, boy referee, and romance aficionado, New York Times and USA Today bestselling author Marie Harte has over 100 books published with more constantly on the way. She’s a confessed bibliophile and devotee of action movies. Whether hiking in Central Oregon, biking around town, or hanging at the local tea shop, she’s constantly plotting to give everyone a happily ever after. Visit Marie's website and fall in love.