THE REWEAVING by Holly Barbo

THE REWEAVING
Book 4 of the Sage Seed Chronicles 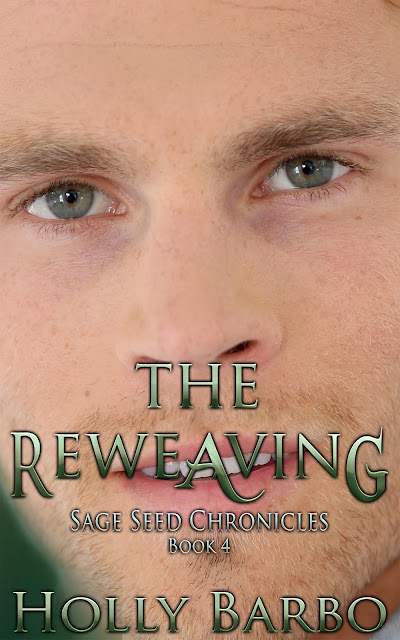 A major event of cataclysmic proportions threatens Ose. The damage done by false gossip and accusations has infected people’s minds, and a misguided but deadly witch hunt hinders the remaining sages’ ability to concentrate on correcting the planet’s imbalance.

Their one chance to save the civilization comes with the next eclipse, but there are too few of them left, and very little time. The people, the weather, and even the planet itself seem to fight them at every step.

Can Drune and the other sages reweave the fabric of their world before the eclipse tears it apart?

Bure adjusted his seat in the saddle. His hands were chafed raw as the Great One’s security had bound him to his horse and had set their pace to cover as many miles as possible during each day. They thought they had him confined and under control. He knew they were comfortably complacent in their plans to exile him on Obsidian Island. He sneered to himself. They underestimated him. He was Bure: the smartest, strongest and most resourceful man in the whole realm. They would regret their treatment of him when he became the Great One. It was only a matter of time.

It was he alone who had devised the potent contact poison. The memory of its musty yet acidic smell came back to him and he smiled. He had tested it on a number of stupid animals before he used it on his aunt. She had been getting too nosey anyway, and her death just proved that his formula worked.

Bure’s eyes narrowed at the memory. It had been the final test, and its success proved that the Ancients smiled on his endeavor. He felt some people were different, and he set about eliminating them. There was something odd about them. He didn’t understand why they seemed distinct, but whatever it was, those people had to go. So they died. It was as simple as that. Too bad that some citizens held those individuals in high esteem.

Since he couldn’t be everywhere at once, he had recruited his brother, Targ, and cousin, Wras. He told them that their victims were witches, and they were more than happy to track down the people on his list and use his poison as he directed. It was a marvelous plan. Then Targ died of his own clumsiness and Wras unraveled — spilling information about Bure’s brilliance to the authorities. He’d take the personal pleasure of killing his cousin as soon as he became the Great One. Eliminate weakness and inefficiency.

He figured it out. First, he would overcome the men around him. The security force thought that they were safe and that fact meant they would relax their vigilance and slip up. He’d get loose and kill a couple. He’d been talking to them every chance he got. They were now aware of his brilliance. He had always got ahead because of his natural skills. This time would be no different. They would see that he was a superior leader. By the time they got through Tight Valley, the security team would be his.

Tonight would be his night, as tomorrow they would travel beyond the valley and reach Kunscap. His eyes glittered in anticipation. With their loyalty switched to him, he would establish himself as leader of the realm. His new forces would capture the Great One and those loyal to him and then take them all to Obsidian Island. He was merciful that way. They would live the rest of their life in the extinct volcano, never to escape. Then he would round up that little bitch Erin and those remaining on his kill list and take them to Obsidian to keep the old leader company.

Once he had the reins of the realm in his hands, things would settle down. He had it all figured out. He went over his plans in his head. Tonight, things would change.