KISSING HER COWBOY by Adele Downs

KISSING HER COWBOY by Adele Downs

Only .99 from Boroughs Publishing!
A cowboy with a fractured back and a cop with a broken spirit heal on a Texas ranch with the help of a stallion named Big Blue.

Treymont Woods is forced to take light duty work around Breezy Meadows Ranch after a rodeo accident. While Trey’s body heals, he offers riding lessons to Houston locals on the greatest horse that ever lived, Big Blue. When police officer Daisy Phillips arrives for her first session, sparks fly. But her invisible wounds run deep, making it hard for her to form connections. KISSING HER COWBOY is the story of two broken people who heal on the road to their happily ever after.
Buy The Book!
Amazon  |  iTunes Boroughs Publishing Group Also available wherever ebooks are sold.

“Oh, Lord.” Treymont Woods kicked up dust on his boots as he sauntered from the stables to the woman who just had to be his new riding student. Her flaming red hair swooshed from one side of her shoulders to the other as she watched his stallion, Big Blue, canter inside the corral. Her hands, knuckles white, clutched the fence and every muscle in her tall, slim figure looked tight. Before he could get to her, she pivoted toward the parking area, moving her feet like she was fixin’ to run.

“Hey there!” He called out as a distraction. By the time Trey reached the woman’s side, he could hear her breathing like she’d raced a Texas mile. Before he could introduce himself, she turned to him with wide green eyes and shouted, “He’s huge!” Pink splotches bloomed under the freckles on her pale skin.

She licked her bottom lip and shook her head. “No, no, no, no….” and started backing away. “I can’t do this. Keep my deposit. I’ll figure something else out.”

Trey lifted his hands in mock surrender. “Okay. No problem. You don’t have to ride if you don’t want to.” Her jeans looked too tight for riding, anyway, and that white blouse would be smudged inside five minutes. Hadn’t the woman ever been to a ranch before?

She stopped moving then and frowned at him, causing twin lines to form above her nose. Her adorable nose, now that he’d gotten a decent look. In fact, everything about the woman seemed downright appealing, despite her reaction to Big Blue. Who in their right mind wouldn’t love the greatest horse that ever lived, on sight? 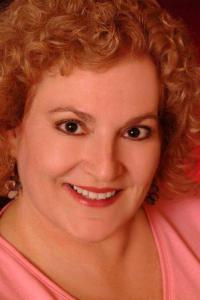