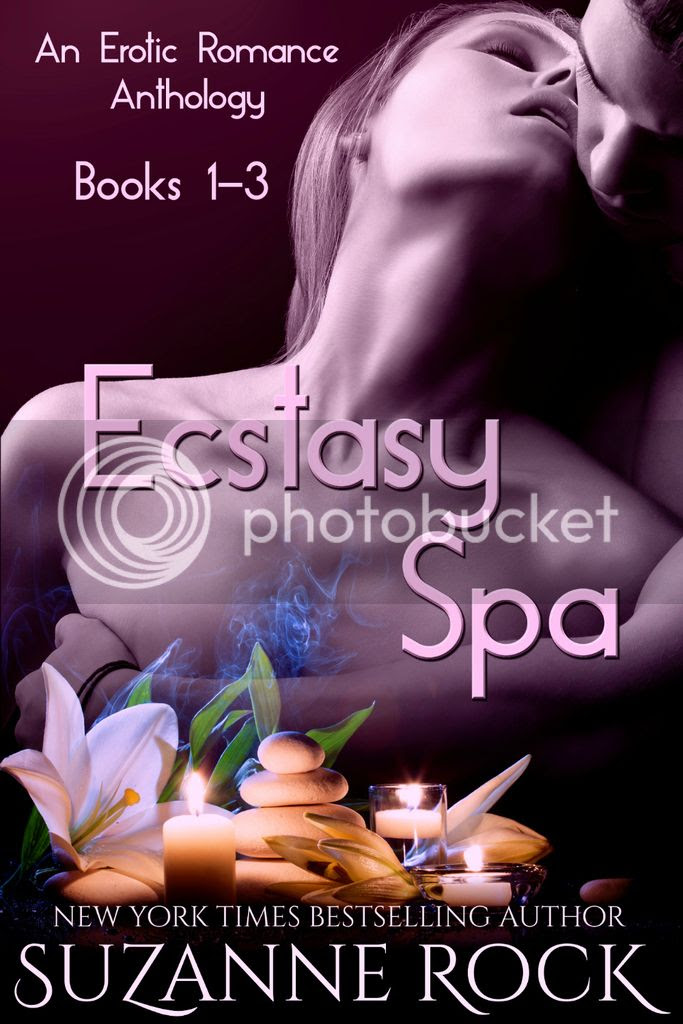 This contemporary romance boxed set is a compilation of my popular Ecstasy Spa series. All of the stories contained in this anthology are a M/F pairing.
This anthology includes: Quick Fix, Aromatherapy, Rub Down
Quick Fix
Dumped by her boyfriend and down on her luck, Annabelle accepts her best friend’s gift and goes to the Ecstasy Spa for an afternoon of escape. She expects the services to be mechanical and the staff to be more brawn than brains. She couldn't be more mistaken.
Instead of cold and clinical, Seth is everything she has ever wanted. Smart and handsome, it’s easy to see why he is the most requested staff member at the spa. Together they embark on a mind-blowing journey of self-discovery that takes them both to heights neither thought possible. As attraction turns into something deeper, Annabelle wonders if she should risk going against spa policy to see if the “quick fix” service she ordered can be changed into something more permanent.
Aromatherapy
When Ian shows up at the Ecstasy Spa to take his new girlfriend out for her birthday, he learns that she has been selling more than simple massages. At first he’s enraged, then he’s intrigued. What does she do with her customers and those little bottles of scented oils? Would she do the same for him? Could he convince her to do those things for him exclusively?
Rub Down
Jake longs to turn his friends-with-benefits relationship with Roxanne into something deeper. As coworkers at the Ecstasy Spa, he knows that it’s against their contracts to be caught dating each other. Roxie seems content with keeping things the way they are, but he dreams of one day taking her hand and leaving the madness of the spa behind. Until then, he takes his frustrations out in his paintings, a secret hobby he has enjoyed since he was a kid. Then one day someone buys one of his oils and commissions him for some more. Suddenly the dream of walking away is a reality. Now if only he can convince the flirty and fun Roxie to leave everything she has ever known and run away with him…

**Excerpt from Quick Fix, Book 1 of the Ecstasy Spa series

Annabelle Richards ran her finger over the gold, embossed script on the gift card. “Ecstasy Spa” was written at the top and a picture of a blooming flower had been painted in watercolor on the left hand side. The words and image were synonymous with luxury and quality. It was widely known that the staff at the spa had gone through extensive training, and each one of them had their own specialty treatment. They were the best of the best and as a result, the spa charged exorbitant prices.

The expense wasn’t the only thing that made the spa so elite however. New customers were only allowed inside if they were invited by regular clients. Getting an appointment was as much about having the right connections as it was about the money.

Thanks to her friend Sienna, Annabelle was finally going to get a peek inside the luxurious spa. She still couldn’t believe her luck.

A lifetime New Englander, Suzanne Rock married her college sweetheart and has been with him for over twenty years. Every summer she drags her husband and two daughters to Maine on a quest for the perfect lobster dinner. Every fall she can be found down in Foxboro, Massachusetts cheering on her favorite football team. In between those trips, she’s a chauffeur, a maid, a chef, an event planner, a hairdresser, a wardrobe stylist, a tutor and a sometimes masseuse. To keep her sanity, she often drinks copious amounts of coffee and stares at the blank screen of her laptop, dreaming of great adventures. Sometimes she even writes them down for others to enjoy.
NYT and USA Today Best Selling author Suzanne Rock resides in central Massachusetts with her college sweetheart and two daughters. She published her first book in June 2009 and has since written over forty erotic stories with St. Martin’s Press, Simon and Schuster, Electric Ink Press, and others. For a listing of her books, please visit her website (http://www.SuzanneRock.com).
Suzanne is represented by Deidre Knight of The Knight Agency (http://www.deidreknight.com) and writes mainstream romances under the pen name Ava Conway (http://www.AvaConway.com).
Five Fun Facts about Suzanne Rock: 1) She is a coffee addict. 2) She tends to get rather emotional when it comes to football. She’s a New England girl, and goes to all of the New England Patriots home games. She collects Patriots clothing, too. 3) Her family loves to play board games. She is the reigning queen of "Ticket to Ride." No one can beat her. 4) In her former life, she was a research scientist at a major biotech company. She evaluated potential medicines for rare genetic disorders. She left because she had lost her passion for science and department changes made her work environment incredibly stressful. 5) She loves living next to the ocean. Being so close to something so vast and powerful restores her soul. She prefers rocky coasts to beaches because rocky coasts are more secluded. Some of her best plotting occurs when sitting next to the water's edge.