A WOMAN OF COURAGE by Marlow Kelly

A WOMAN OF COURAGE 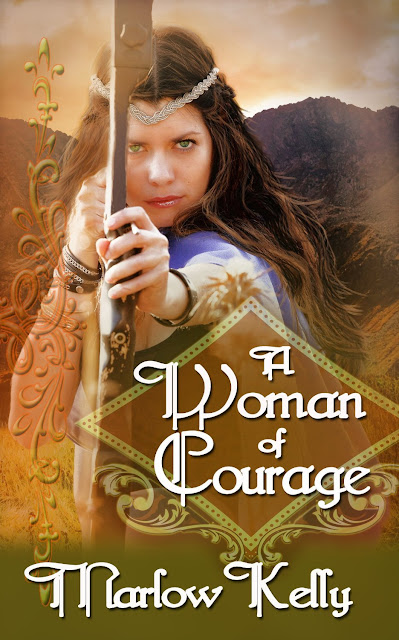 When an injured Fianna Byrne turns up at Connell O’Neill’s gate twelve years after their separation he knows this could be his last chance to find happiness with the woman he loves.
False accusations against Fianna had strained relations between their clans and forced Connell, under Irish law, to divorce her. Their disastrous three-month relationship left Fianna pregnant and heartbroken. She has avoided Duncarraig and her ex-husband ever since.
But with her home obliterated by the Vikings, Fianna must face her past in order to save her son, and prove once and for all she is a woman of courage.

Fianna Byrne scrambled up the steep embankment that circled the hillfort of Duncarraig. Scratches streaked her legs, her body ached, and no matter how much she tried to prevent it, blood seeped into her mouth from a gash at her temple. But these wounds were inconsequential compared to her grief. Her home was gone, destroyed by an attack that began at sundown and ended with the destruction of everything she loved. She hammered on the wide wooden gates of the fort. Would she be welcomed or turned away? Were old feuds still guiding their decisions? Muffled voices floated down from the rampart, and footfalls echoed on the wooden palisade. They were aware of her presence. She almost prayed they would kill her where she stood. It was what she deserved. As the leader of Clan Byrne, she had failed to protect her people. She turned to see the sun rising over the eastern horizon. Orange and gold rays danced over the fields, welcoming the dawn. It would be a glorious summer day. On any other morning she would have watched the sunrise, and prepared for the long working day that characterized the season. But all that was gone, obliterated in one hellish night.

After being thrown out of England for refusing to drink tea, Marlow Kelly made her way to Canada where she found love, a home and a pug named Max. She also discovered her love of storytelling. Encouraged by her husband, children and let’s not forget Max, she started putting her ideas to paper. Her need to write about strong women in crisis drives her stories and her curiosity regarding the lives and loves of historical figures are the inspiration for her characters.